Association Between Familial Mediterranean Fever and Cachexia in Females

Objectives: This study aims to investigate the association between familial Mediterranean fever (FMF) and cachexia in females.

Conclusion: This study pointed at a significant association between cachexia and FMF in females. Muscle endurance was not affected in FMF patients with cachexia; however, decreased muscle strength, impaired quality of life and increased fatigue were observed in these patients.

Familial Mediterranean fever (FMF) is an autosomal recessive chronic disease characterized by repetitive abdominalgia and chest pain accompanying fever. Latterly, association of chronic inflammation in many inflammatory diseases, particularly in rheumatoid arthritis (RA), with body composition and cachexia is frequently studied. Chronic diseases such as infections including tuberculosis, cancer, acquired immune deficiency syndrome (AIDS), congestive heart failure, chronic obstructive lung disease, Crohn disease, and cystic fibrosis show the characteristics of cachexia as well as some elders without any chronic diseases.[1] Although several diseases are being associated with cachexia, underlying pathophysiologic mechanisms are still unclear. Cachexia is defined as a syndrome that emerges during other chronic diseases and characterized by loss of weight, loss of fat and accompanying loss of muscle by the increased protein catabolism.[2,3] Cachexia is associated with increased mortality and morbidity.[4] Cachexia is distinct from starvation, age-related loss of muscle mass, primary depression, malabsorption and hyperthyroidism and is associated with increased morbidity.[1] Anker et al.[5] has demonstrated that cardiac cachexia is associated with a poor prognosis, independently of functional severity, age, and exercise capacity and cardiac function. Inflammatory cytokines in FMF patients may change the body composition and lead to cachexia. Therefore, in this study, we aimed to investigate the association between FMF and cachexia in females.

This study was conducted at Cumhuriyet University Faculty of Medicine between August 2013 and January 2014. The number of subjects was determined to be 30 to provide 80% of the research power. Thirty-two females with FMF (median age 27.50 years; range, 18 to 50 years) and 30 healthy females (median age 32 years; range, 18 to 50 years) were included in the study. Participants (i) <18 years old and >50 years old, (ii) without written consents, (iii) with chronic diseases and rheumatologic diseases other than FMF, (iv) who used corticosteroid within last year, (v) FMF patients who had malnutrition according to nutrition evaluation test, (vi) FMF patients who had disease duration of less than one year and (vii) those with acute episode were excluded. Patients were chosen and classified according to Tel-Hashomer criteria.[6] Demographic data including age, occupation, smoking, duration after first diagnosis, delay time before first diagnosis, family history, dose of colchicines, and response to colchicines therapy (complete response: with no episode, incomplete response: >50% decrease of the frequency of the episodes, no response: <50% decrease of the frequency of the episodes or any response), frequency of the episodes (in a month), additional medications and accompanying diseases were recorded.[7] Symptom severity was scored by Tel-Hashomer and gene analysis for the mutation of MEFV was recorded.[8] Circumference of arm, waist, and thigh was recorded in centimeters. Body mass index (BMI, in kg/m2 and classified as slim, normal, overweight or obese) was calculated to evaluate the obesity while rate of the circumference of the waist to the thigh (WTR) was calculated to evaluate the central obesity. Both measures are frequently used to evaluate cardiovascular risks.[9] Short form 36 (SF-36) for quality of life (QoL) and Multidimensional Assessment of Fatigue (MAF) scale were applied to both groups.[10,11] Mass of skeletal muscles was measured with dual X-ray absorption (DXA with Hologic QDR 4500 W, Bedford, MA, USA) and mass of fat, muscle, and bone (for total body, and for arm, leg, and trunk separately) were recorded. Participants with a composition of fat less than 29% were accepted as cachexia.[12] Muscle strength was measured from the dominant knee with an isokinetic dynamometer (Biodex Medical Systems, Shirley N.Y. 11967, USA). Peak torque value of flexion at the velocity of 60°/second, peak torque value of extension at the velocity of 60°/second, the value of total work during flexion at the velocity of 240°/second and value of total work during extension at the velocity of 240°/second were recorded (Figure 1). Strength of hand grip was measured from dominant hand with hand dynamometer (Saehan hydraulic hand dynamometer model SH5001, Masan, Korea). C-reactive protein (CRP, mg/L), erythrocyte sedimentation rate (ESR, mm/hour), fibrinogen (mg/dL) and serum creatinine kinase (CK, U/L) levels were recorded. The study protocol was approved by the Cumhuriyet University Faculty of Medicine Ethics Committee. A written informed consent was obtained from each participant. The study was conducted in accordance with the principles of the Declaration of Helsinki. 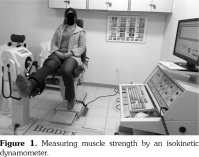 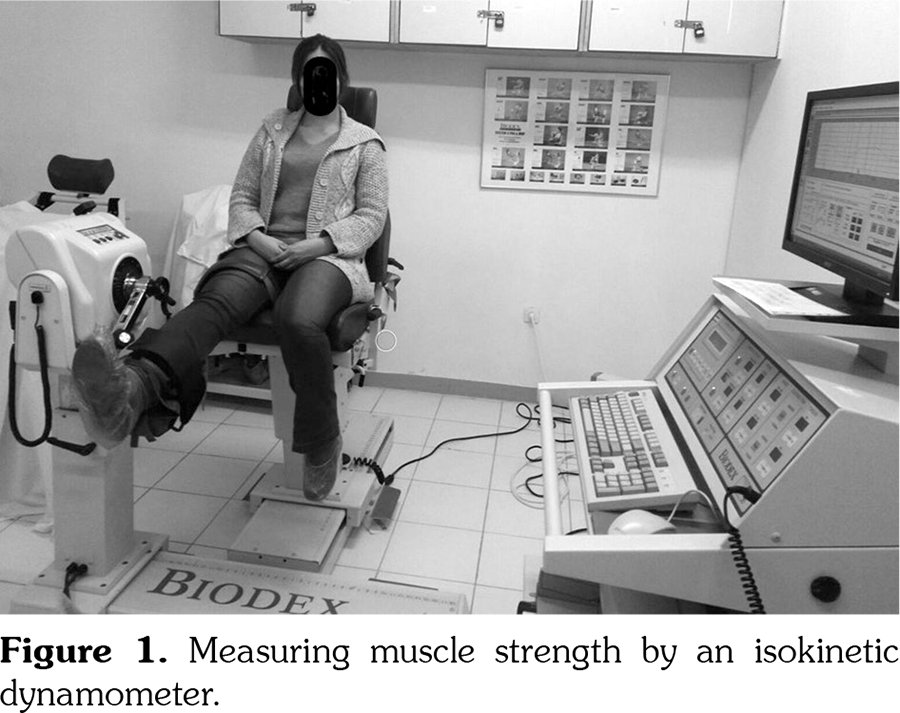 While four patients (12.5%) were smokers, the number of smokers in controls was three (10%). Twenty-three patients (71.9%) had a family history of FMF, and all of them was under the treatment with colchicines, except one who was using canakinumab. Results of the anthropometric measures and the comparison of the patients and controls according to these measures are given in Table 1. According to the BMI, majority of the patients (68.8%) had normal weight where majority of the controls were overweight or obese (56.7%). Twelve patients (27.5%) and one control (3.3%) had cachexia, and prevalence of cachexia was significantly higher in patients than controls (p=0.001, χ2=10.90).

Table 1. Anthropometric measures of participants, and comparison of FMF patients and healthy controls
×

Table 2 shows the muscle strength and mass of muscle without fat, and the comparison of patients and healthy controls according to these variables.

Table 2. Muscle strength and mass of muscle without fat, and comparison of FMF patients and healthy controls
×

Table 3. Comparison of patients with and without cachexia according to anthropometric measures
×

Table 4. Comparison of patients with and without cachexia according to duration after diagnosis, delay time of diagnosis, Tel-Hashomer, MAF and subscales of Short Form 36 scores
×

Table 5. Comparison of patients with and without cachexia according to muscle strength and body composition
×

In our study, prevalence of cachexia was higher in patients than healthy controls (27.5% vs. 3.3%, respectively). Although, to our knowledge, there is no clinical data in the literature for cachexia in patients with FMF, cachexia was reported in 10-67% of RA patients.[2,4] We think that this variation of frequency is related to the methodological differences to detect cachexia. Frequencies of cachexia in other chronic diseases are 35% for AIDS, 30% for cancer, 20% for chronic obstructive lung disease, 40% for renal failure, and 20% for heart failure. Frequency of cachexia in female FMF patients seems to be similar to that of other chronic diseases in the literature.[17]

Duration and delay time of diagnosis in this study were similar to the literature, and there was no significant difference between the FMF patients with and without cachexia.

One of the differential features of cachexia is loss of weight both with loss of muscle mass without fat and loss of fat. In severe cachexia, as a result of drastic hypoalbuminemia, edema can emerge. In these cases, despite the severe cachexia, weight loss may not be seen. The same condition is noted in severe heart failure, cirrhosis, and renal failure. Continuous loss of skeletal muscle mass may cause loss of muscle strength, impaired respiratory function, general functional status and health-related QoL as well as disability. Loss of muscle mass is not specific for cachexia and may occur by starvation, malnutrition, aging, immobilization, sedentary lifestyle, and enervation. So, cachexia should be distinguished from other causes of loss of muscle mass leading to sarcopenia related to the aging.[3] A majority of the clinical studies performed among patients with cancer, AIDS, congestive heart failure, severe renal failure, and RA showed similar findings to our study in terms of loss of muscle mass without fat and loss of fat.[29-33]

In conclusion, recognizing cachexia in patients with chronic inflammation has great importance, and physicians should be alert for early diagnosis. This study pointed at a significant association between cachexia and FMF. Muscle endurance was not affected in FMF patients with cachexia; however, decreased muscle strength, impaired QoL and increased fatigue were observed in these patients. This study showed that cachexia may impair the functional status of FMF patients. FMF patients with cachexia were slim and have lower values of the circumference of arm, waist, and thigh than patients without cachexia. Accordingly, an anthropometric evaluation may enable detecting patients at higher risk for cachexia.