Results: Systemic sclerosis patients showed a significantly lower BP ratio than PRP patients and healthy subjects (p=0.004). No statistically significant difference was observed between the SSc and PRP patients in respect to BF ratio. A gradual decrease of BF and BP with the severity of NC microangiopathy pattern ("early", "active" or "late") was found in SSc patients, while the differences were not statistically significant. Patients with diffuse SSc showed lower BF and higher BP than those with limited SSc, while these differences were without statistical significance. There was no significant correlation between BF or BP values and type of SSc (limited or diffuse) (p=0.77 versus p=0.54, respectively) as well as three microangiopathy patterns (p=0.22 versus p=0.54, respectively).

Nailfold capillaroscopy (NC) is a safe and well-established technique to assess and quantify morphological capillary alterations in rheumatic diseases, particularly systemic sclerosis (SSc) and dermatomyositis.[1,2] Other noninvasive techniques for assessment and quantification of blood perfusion in SSc patients are laser Doppler flowmetry (LDF) and laser speckle contrast analysis (LASCA).[3,4] Whether the combination of all three techniques (NC, LDF, and LASCA) improves the classification of SSc, including distinguishing patients with SSc from those with primary Raynaud's phenomenon (PRP) and from healthy controls, has yet to be confirmed by the appropriate studies.[5] However, when only a single microcirculatory tool is used, NC seems to be the best discriminator.

Very recently, 99mTc-pertechnetate hand perfusion scintigraphy (HPS) has been reported as a valuable imaging method for the differentiation between RP patients with normal and those with abnormal microcirculation of hands.[6] Therefore, in this study, we aimed to assess the possible relationship between 99mTc-pertechnetate HPS and NC in SSc patients.

This pilot study was conducted at Institute of Rheumatology in Belgrade as well as Clinical Center of Serbia, Center for Nuclear Medicine in Belgrade, Serbia between February 2013 and December 2013. The study was designed to obtain basic information for a further full-scale trial of efficacy of HPS in the assessment of peripheral blood perfusion in SSc patients with different patterns of nailfold microangiopathy. The study group consisted of 25 SSc patients (6 males; 19 females; mean age 54.2±9.7 years; range, 32 to 67 years), 18 female patients with PRP (mean age 47.1±9.5 years; range, 34 to 65 years) and 10 healthy individuals (3 males, 7 females; mean age 52.7±12.6 years; range, 37 to 73 years). The study protocol was approved by the Institute of Rheumatology Ethics Committee (Date: 31 January 2013, No: 29/1-6). A written informed consent was obtained from each participant. The study was conducted in accordance with the principles of the Declaration of Helsinki.

and low dose acetylsalicylic acid (ASA) 100 mg daily (10:12). There was no significant difference in the use of vasodilatator between dSSc and lSSc groups. Patients were recruited from among the out-patients who were referred to the NC Service of the Institute of Rheumatology, Belgrade.

Patients with PRP had mean Raynauds Phenomenon (RP) duration of 5.9±4.6 years, met the diagnostic criteria of LeRoy and Medsger[9] and had no clinical or immunological evidence of connective tissue disease; they had normal nailfold capillary findings, normal erythrocyte sedimentation rate, negative test for antinuclear antibodies (ANAs), no tissue necrosis, ulceration, or gangrene, and no evidence of a secondary cause on the basis of patient’s history and general physical examination. Among them, five patients received Ca channel antagonists, two ACE inhibitors, four pentoxifylline, and 11 ASA 100 mg daily. The PRP patients were also recruited from among the out-patients who were referred to the NC Service.

Before the scintigraphic examination, SSc patients as well as PRP patients had a drug- free period lasting at least two weeks, during which they were not allowed to use Ca channel antagonists, ACE inhibitors, pentoxifylline, and low dose ASA.

The healthy individuals were recruited from among patients referred to blood pool (BP) scintigraphy due to suspected liver hemangioma. They did not have any attacks of RP, hands or fingers lividity, or other disorders that may be attributed to changes in small blood vessels and did not take medications that could change the tone or the permeability of blood vessel walls.

All participants were instructed to avoid cigarette smoking, coffee, and alcohol for 12 hours before the examination. Nailfold capillaroscopy findings were assessed by a rheumatologist unaware of the clinical diagnosis. The eight fingers (excluding thumbs) on both hands were observed using an Opton microscope (Carl Zeiss Microscopy GmbH, Jena Germany) on the same day as scintigraphic procedures, according to the previously published method.[6] One of the following capillaroscopy patterns of microangiopathy was assigned to the SSc patients: ‘‘early’’, ‘‘active’’ or ‘‘late’’, as described by Cutolo et al.[10]

Both radionuclide angiographies, i.e. blood flow (BF) and BP scintigraphy of hands, were performed with gamma camera in all 53 participants following in vivo labeling of autologous red blood cells using approximately 550 MBq (15 mCi) of 99mTc-pertechnetate. Region of interest (ROI) was drawn around the fingers (excluding thumbs) and the palm. The principles of the scintigraphic procedure were reported in previously published material.[6] 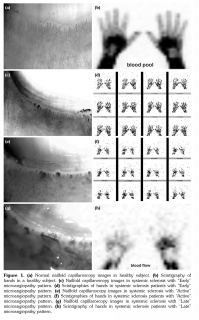 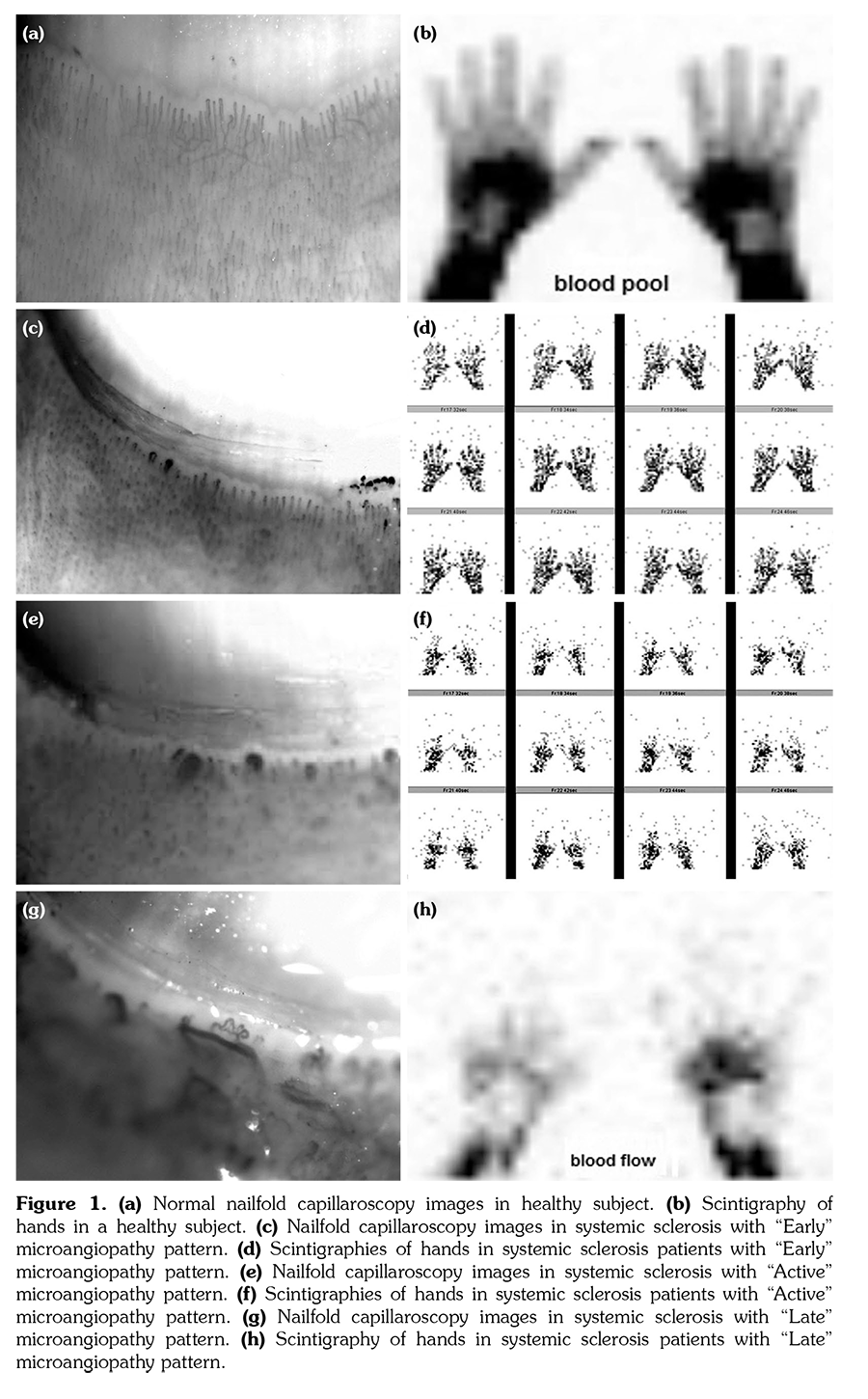 No statistically significant correlation was found between BF and BP values on one side, and any of the following on the other: patient’s age, RP duration, history or presence of digital pitting scars and esophageal or pulmonary involvement, as well as presence of either ACA or Scl-70 antibodies. However, positive correlation was observed between the BP and telangiectasia (r=0.43, p=0.05) (Table 2).

Vascular hallmarks of SSc and involves both the macro and microvasculature. By definition, the microcirculation is restricted to BF through vessels smaller than 100 μm (i.e. arterioles, capillaries, and venules).[11] Microvascular damage and dysfunction are involved in a number of clinical manifestations of SSc including RP, digital ulceration, pulmonary arterial hypertension, and hypertensive renal crisis.[11] Our previous study has shown that HPS is able to detect changes in SSc microvasculature.[6]

The present study has clearly shown that SSc patients have a significantly lower BP than PRP patients and healthy subjects, which is in accordance with previous results obtained by other tools such as LDF[3] and LASCA.[12] Unlike these methods indicating that SSc patients with a worse pattern of microvascular damage and capillary loss (“late” NC pattern) have significantly lower blood perfusion than patients with a less severe microangiopathy (“early” NC pattern), our study has shown a gradual decrease of BF and BP in SSc patients with progressive severity of NC patterns of microangiopathy (“early”, “active” and “late” NC pattern), although the differences were not statistically significant. A possible explanation for this difference lies in the fact that half of our patients with “late” NC pattern had telangiectasia on hands and face likewise. These regions, perfusion of which is notably high, are common sites of telangiectasia. Whether the presence of telangiectasia can influence the hand BF and BP measurements remains to be clarified.

Ruaro et al.[12] were the first that have reported higher median perfusion values at the level of face and hand dorsum in SSc patients than in healthy subjects, indicating telangiectasia as a possible cause. It should also be noted that these areas are mainly served by macrocirculation vessels, and therefore usually spared from the RP. We agree with their explanation that these areas are mainly served by macrocirculation vessels. Our methodology has involved determination of fingers-to-palm ratios; however, it should be stressed that our term “palm” denotes the palm as a whole, and neither of the two sides of a hand separately. Our BF and BP indices were calculated from total counts acquired within the ROI drawn around the fingers (excluding thumbs) and the palm. BF was calculated from the arterial phase of the time-activity curve of the first pass of 99mTc-pertechnetate bolus through hand vasculature, obtained by drawing the ROI in sequential angioscintigrams. BP fingers-to-palm ratios were calculated from ROIs drawn in the scintigram acquired five minutes after the injection of a 99mTc-pertechnetate. BF values (reflecting the state in the macrocirculation vessels) are similar in our SSc and PRP patients, while BP values (reflecting the state of both macro and microcirculation) were significantly lower in SSc patients than in either PRP patients or healthy subjects.

Moreover, Rosato et al.[11] have evaluated three ROIs. ROI1 included the three fingers of the hand from the second to the fourth distal to proximal interphalangeal joint. ROI2 included the area between the proximal interphalangeal and the metacarpophalangeal joint. ROI3 included only the dorsal surface of the hand without the fingers. They have shown that mean perfusion of the ROI1 is high in healthy controls, intermediate in SSc patients and low in PRP. In ROI2 and ROI3, mean perfusion were similar in each group of patients, which again suggests that these areas are served mainly by macrocirculation vessels. Ruaro et al.[12] have also found that blood perfusion differences between SSc patients and healthy subjects were particularly evident at the level of periungual and fingertip areas. The greater hypoperfusion observed in these areas might support the higher risk and prevalence of local digital ulcers in SSc patients, particularly in those with the “late” NC pattern.

Finally, our patients with dSSc showed lower BF and higher BP values than those with lSSc, although the differences were not statistically significant. Similar to our results, Cutolo et al.[3] as well as Rosato et al.[11] have observed no statistically significant differences in fingertip blood perfusion assessed by either LDF or laser Doppler perfusion imaging in two groups of patients with SSc (lSSc and dSSc).

A possible limitation of our study is that it was designed to assess the peripheral vasculopathy in hands of SSc patients globally (macro and microcirculation). In fact, magnetic resonance angiography (MRA) is the gold standard for the assessment of the macrovasculature.[13] This diagnostic modality has been recommended to evaluate the large to medium artery pathology, as seen in atherosclerosis, Takayasu vasculitis and Buerger's disease. These disorders are characterized by limb claudication on exercise, asymmetric abnormalities or an isolated and persistent digital ischemia that can mimic RP. However, even the evaluation of the total hand perfusion may be considered as a valuable contribution for the literature, while further studies including MRA are need to confirm these data in larger patient populations.

Investigation was partially supported with grant of the Ministry of Education, Science and Technological Development of Serbia M175018.