Objectives: This study aims to demonstrate the effect of subcutaneous injections of abatacept on the histology of testes in mice.

Conclusion: To our knowledge, this is the first control-blinded study of BALB/c mice suggesting that abatacept may not have testicular toxicity. Further fertility and testicular toxicology evaluations including semen analysis and gonadal hormones should be performed to clarify our findings.

Rheumatoid arthritis (RA) is a disorder characterized by joint and systemic inflammation, joint pain, deformity, and destruction. The use of biologics has significantly improved outcomes in patients with RA, making disease remission an attainable goal. The biologics approved for treatment of RA include abatacept, adalimumab, anakinra, certolizumab pegol, etanercept, golimumab, infliximab, rituximab, and tocilizumab.[1] Abatacept efficacy has been demonstrated in numerous placebo-controlled randomized trials conducted on short- and long-term and its effectiveness has been proven in daily clinical practice by analyzing published evidence from disease registries.[2,3]

Abatacept is a selective T-cell co-stimulation blocking agent that is a fusion protein composed of the fragment crystallizable region of the immunoglobulin G1 fused to the extracellular domain of cytotoxic T-lymphocyte associated protein 4.[4]

In clinical studies (AIM, Abatacept in Inadequate responders to Methotrexate; ATTAIN, Abatacept Trial in Treatment of Anti-TNF INadequate responders; ASSURE, Abatacept Study of Safety in Use with Other RA Therapies; ATTEST, Abatacept or Infliximab versus Placebo, a Trial for Tolerability, Efficacy and Safety in Treating Rheumatoid Arthritis), the percentage of adverse drug reactions (ADRs) was roughly similar to placebo (52.2% abatacept vs. 46.1% placebo). The most frequently reported ADRs (≥5%) among abatacept-treated patients were headache and nausea. The proportion of patients who discontinued treatment due to ADRs was 3.4% for abatacept-treated patients and 2.2% for placebo-treated patients. Acute infusion-related reactions were mild or moderate and occurred in 0.1-1% of the patients. These consisted of hypo/hypertension, dyspnea, nausea, urticaria, flushing, cough, pruritus, rash, and wheezing.[2,3]

The safety profile has been evaluated in the long-term without raising major concerns and in particular with no significant increase in the risk of serious infections or malignancy. Furthermore, compared to other biologics, abatacept has been suggested to display a better safety profile in special populations, such as patients with chronic heart failure and demyelinating disorders.[3,5,6]

Gonadal dysfunction and infertility in patients of both sexes with chronic rheumatic illness are multifactorial. Impaired health status, such as malnutrition, obesity, alcohol, tobacco or drugs, and female and male genital disorders, may reduce fertility.[7,8] The main contributing factor for gonadal dysfunction and infertility in female and male patients with rheumatic diseases seems to be drug therapy.[7-9] To our knowledge, there is neither human nor animal data on the effect of abatacept on the gonads.[9-13] In this study, we aimed to demonstrate the effect of subcutaneous (SC) injections of abatacept on the histology of testes in mice.

This study was conducted at the faculty of Medicine, King Saud University between March 2016 and June 2016. Twenty male BALB/c mice (average weight, 25 g, aged 12-14 weeks) that were not previously subjected to therapy or experiments were purchased from the Faculty of Pharmacy at King Saud University. The study was approved by King Saud University, Faculty of Medicine Institutional review board through the institution's research ethics board approval number E-14-1300. This research was conducted in compliance with the research ethics standards. All mice received humane care and the study protocol complied with the institution's guidelines.

The mice were kept in polycarbonate Makrolon® (Tecniplast, Milan, Italy) plastic cages covered with a stainless-steel cover in the animal house. The mice were exposed to daily periods of 12 hours of light and 12 hours of dark, and were kept under observation for three weeks. No evidence of sickness was observed.

The 20 mice were divided into two groups of 10 mice. This is a pilot study which is needed due to the lack of the literature to estimate the risk rate of liver toxicity in abatacept. Therefore, we used the ‘resource equation’ approach, which sets the acceptable range of the error degrees of freedom in an analysis of variance. The minimum calculated number of mice was four and the maximum was seven, thus 10 mice in each group were more than adequate to meet the objective.[14] The unit of analysis for each dataset was group of animals. One group received SC injections of abatacept (0.25 mg/0.03 mL normal saline [NS]). We extended the intervals between doses using the frequency of initial intravenous (IV) abatacept doses, biweekly for three doses (i.e. one dose at weeks 0, 2, and 4) and the fourth dose administered at week eight.[15] The second group received SC injections of NS (0.03 mL) weekly. We used weekly NS injections for the control group because this study is considered as part of multi-arm animal trials using methotrexate and four biological agents including etanercept. The study was masked to the lab assistant who was handling the experiment and the histopathologist.

Each testicular tissue specimen was collected in a tube labelled with a code and sent to a pathologist to issue the study report without knowing the identity of any of the specimens with respect to treatment, group assignment, or outcomes from in-life data in the study.

Since the appropriate dosage for SC injections of abatacept has not been reported in animals, we extrapolated this based upon recommended doses used in human studies. Ruperto et al.[16] injected children (10-25 kg body weight) diagnosed with juvenile idiopathic arthritis with 50 mg of abatacept. Thus 50 mg SC abatacept for a child weighing 10 kg corresponded to 0.125 mg weekly or 0.25 mg every other week for an average mouse weighing 25 g.

During the 10th week, mice were sacrificed by applying pressure to the neck and dislocating the cervical spine. Subsequently, testicle histopathological studies were performed for each mouse in both groups. The testicle tissues were bisected and fixed in 10% buffered formalin for 24 hours. The tissues were then processed using hematoxylin and eosin stain. The slides were examined using a light microscope.

Of the abatacept-treated mice, 3/10 died during the last three weeks of the experiment. There was no clinical evidence of sickness prior to death. No deaths were reported in the control group. 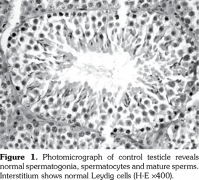 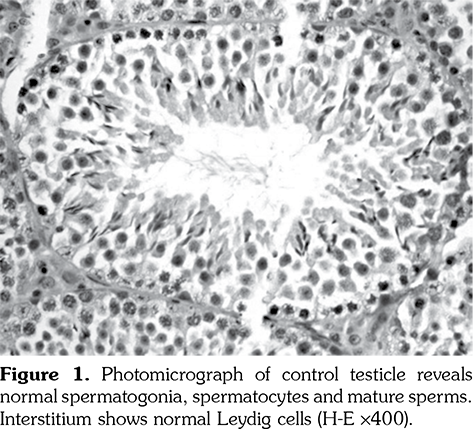 The long-term safety of SC abatacept showed a low incidence of serious infections, malignancies, autoimmune events, and injection- site reactions.[6,12,17-26] Due to the limited budget, we had only four vials of SC abatacept and to decrease the risk of side effects, we extended the intervals between doses using the frequency of initial IV abatacept doses, biweekly for three doses (i.e. a dose at weeks zero, two, and four) and the fourth dose administered at week eight.[15]

However, in the current study, mortality rate was 30% in the abatacept-treated mice despite using the recommended dose for juvenile idiopathic arthritis (as per body weight category above). On the other hand, no mortality was reported in the control group. The husbandry was the same for both groups, and there were no clinical signs of sickness prior to death. The deaths were probably the result of cardiovascular events. Mice might respond to experimental interventions in ways that differ strikingly from human.[27]

Alten et al.,[28] investigated the safety of long- term SC abatacept injections using integrated analysis of clinical trial data for more than four years of treatment. Deaths occurred at an incidence rate of 0.59 (95% confidence interval 0.40-0.88). Of seven deaths classified as certainly, probably, or possibly related to treatment, four were due to infections [including two cases of pneumonia (combined with pulmonary tuberculosis in one patient), one gastrointestinal infection, and one case of staphylococcal sepsis], one death was caused by peritoneal neoplasm, one was due to a combination of wound infection and malignant lung neoplasm, and one was attributable to multi organ failure. An additional 18 deaths were considered as unlikely to be related or as unrelated to treatment; these deaths were most frequently due to cardiovascular events.

Studies of the effects of disease-modifying antirheumatic drugs on the male reproductive system have been limited.[6,12,18-26,29-31] On the other hand, monotherapy with methotrexate does not, as a rule, induce infertility in men. Sperm abnormalities may occur in rare cases, as in a young male patient with severe psoriasis treated with methotrexate.[7] Oligospermia was detected in this patient, while normal sperm concentration was observed after the discontinuation of the drug. Furthermore, in a recent study, the administration of folic and folinic acid together with methotrexate therapy improved germ cell toxicity in mice.[7,13]

The most important alkylating agent used in male patients with rheumatic diseases is cyclophosphamide (CYC). This drug may induce depletion of germinal epithelium and cause damage in Sertoli and Leydig cells. Although the gonadotoxic effects of alkylating drugs depend on their mechanism of action, cumulative doses, and number of cycles, there is no safe threshold of the cumulative dose of CYC and it is not possible to predict which patients will become infertile.[7]

There is no convincing evidence of serious gonadal dysfunction induced by biologic agents. In fact, there are numerous reports of new pregnancies inadvertently occurring during therapy with adalimumab, etanercept, and infliximab, and experts suggest that tumor necrosis factor alpha (TNF-α) inhibitors may be continued during pregnancy “when strongly indicated”.[7,8] Semen abnormalities have rarely been studied in patients with rheumatic diseases treated with biologic agents, but the available data suggest that semen quality is relatively preserved.[6,7,18-21] The decreased sperm motility and the reduced number of normal oval forms observed in eight male patients with inflammatory bowel disease treated with infliximab were present before treatment, and therefore, the drug cannot be held accountable for this finding. A mild semen abnormality was shown in two of three ankylosing spondylitis patients receiving anti-TNF-α inhibitors, contrasting with a recent report of four ankylosing spondylitis patients who had six healthy children during infliximab therapy.[6,7,12,18-26] Whether abatacept exerts harmful effects on reproduction has not been studied.[7,10,24]

Absence of significant changes in testicular histology with normal spermatogenesis in abatacept-tested group indicates that abatacept may not be considered as toxic to the testicles of BALB/c mice. However, we have to keep in mind that monitoring for adverse testicular effects in mice in real time presents a challenge because there is a latency period of several weeks between the time of an injury to seminiferous tubules and the time when that injury can be detected using the semen analysis;[7,32-38] in fact, early onset of drug induced gonadal toxicity might appear within days to few weeks.[39-41]

A limitation of this study includes the lack of assessment of semen and hormonal levels of gonadotropins and testosterone.

In conclusion, to our knowledge, this is the first control-blinded study of BALB/c mice that has demonstrated the lack of testicular toxicity after SC injections of abatacept. Further fertility and testicular toxicology evaluations should be conducted including semen analysis, serum testosterone concentrations, and serum gonadotropin concentrations.

The author declared no conflicts of interest with respect to the authorship and/or publication of this article.

The author received financial support for the Scientific Research from King Saud University through Research Group no RG RGP-VPP-126.

The authors are thankful to the Deanship of Scientific Research at King Saud University for funding this work through Research Group no RG RGP-VPP-126. The author is grateful to the histopathologist Dr. A. Al Humidi for the reporting of the histopathological studies. The author is also grateful to Dr. Najma Khalil, Dr. Abdullah Al Kahil, Mr. R. Eulin, Ms. N. Ocampo and Ms. J. Mendoza for their assistance, and to the Research Ethics Committee at the College of Medicine for the approval of this study.