The Frequency of Fibromyalgia and its Relationship With Disease Activity in Female Patients With Behçet’s Disease: A Cross Sectional Study

Patients and methods: This cross-sectional study included 72 female patients with BD (mean age 39.7±10.5 years; range, 22 to 74 years) between June 2018 and February 2019. The frequency of FM was evaluated according to the American College of Rheumatology alternative criteria. Active clinical features and BD activity were evaluated with the Behçet's disease activity form (BDCAF).

Fibromyalgia (FM) is a common cause of chronic widespread musculoskeletal pain, often accompanied by fatigue, cognitive disturbance, psychiatric symptoms and multiple somatic symptoms. The prevalence of FM varies between 1.7% and 6.4% in the community and the frequency is increased among patients with chronic inflammatory arthritis and systemic autoimmune rheumatic disease.[1-7] In recent years, extensive research has been conducted on the immunological background of FM. In general, the findings do not support the belief that FM is a non-inflammatory rheumatic disease.[8-12] In addition, disease activity was found to be higher in rheumatic diseases such as rheumatoid arthritis (RA), axial spondyloarthropathy and Sjögren's syndrome (SS) accompanied by FM.[13-15] Behçet's disease (BD) is characterized by recurrent oral aphthae and any of the several systemic manifestations including genital aphthae, ocular disease, skin lesions, gastrointestinal involvement, neurologic disease, vascular disease or arthritis. The incidence of FM in BD is higher than in the normal population and its frequency ranges from 5.7% to 37.1% according to data from a limited number of studies.[16] The results of studies investigating the relationship between FM and BD activity are contradictory.[17-20] BD is known to be more severe in males and FM is more common in females.[3,21] Therefore, it is not appropriate to evaluate the relationship between disease activity and FM in patients with BD without grouping by sex. In 2013, alternative criteria for classifying FM were developed by the American College of Rheumatology (ACR) and these criteria were easier to use and found to be high in specificity compared to the 2010 ACR preliminary diagnostic criteria for FM.[22] In this study, we aimed to determine the incidence of FM in female patients with BD and to investigate whether disease activity changes in the presence of FM in female patients with BD.

This cross-sectional study was conducted at Bursa Yüksek ‹htisas Training and Research Hospital between June 2018 and February 2019. Among 155 female patients diagnosed with BD in the rheumatology outpatient clinic records, 97 patients who volunteered to participate in the study were included in the first evaluation (ClinicalTrials.gov ID: NCT03543709). Finally, 72 female BD patients (mean age 39.7±10.5 years; range, 22 to 74 years) were included according to the inclusion criteria which were being between the ages of 18 and 75 years and meeting the International Study Group classification criteria.[23] The exclusion criteria were not cooperating sufficiently to complete the surveys or having thyroid disease, pregnancy, diabetes, chronic renal failure, cancer or systemic rheumatic disease. The participants who were not included in the study as a result of the initial evaluation are summarized in Figure 1 together with the reasons for exclusion. The study protocol was approved by the Uluda¤ University School of Medicine Clinical Research Ethics Committee (2018-02/14). A written informed consent was obtained from each patient. The study was conducted in accordance with the principles of the Declaration of Helsinki.

Figure 1. Flowchart summarizing the patient selection process to the study.
× 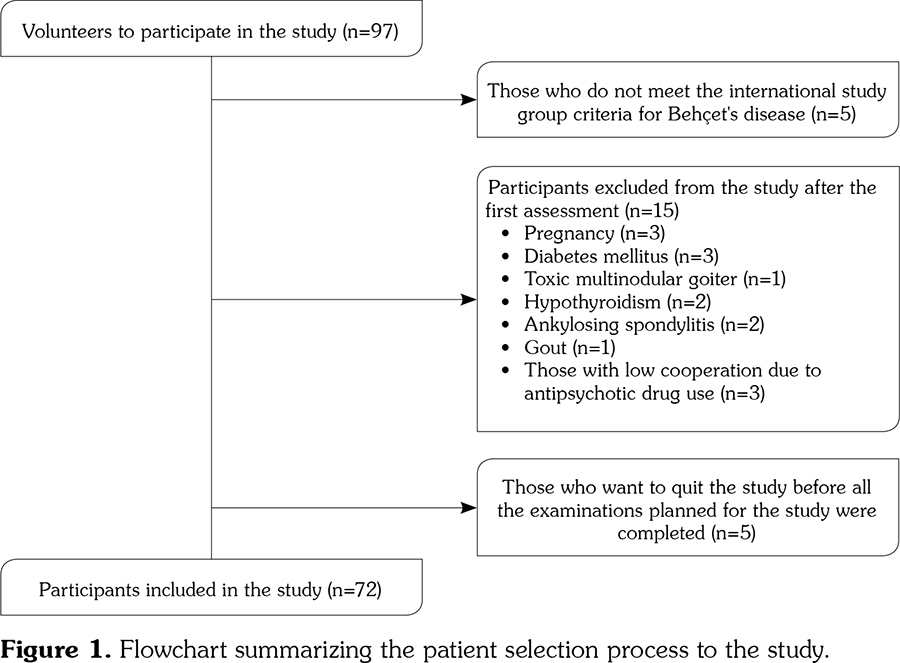 Patients’ clinical features, demographic characteristics and medications were recorded. Human leukocyte antigen (HLA)-B51 genetic test results were obtained from patient charts. Behçet's disease activity form (BDCAF) was used by the clinician to assess disease activity.[24] In BDCAF, the presence of 12 clinical features of BD within the last four weeks were questioned. These features consisted of arthralgia, arthritis, diarrhea, erythema nodosum, eye inflammation, genital ulcers, headaches, mouth ulcers, nausea/ vomiting, new central nervous system involvement, new major vessel inflammation and pustules. The presence of each clinical feature was scored as 1 point. Behçet's disease clinical activity index (BDCAI) values of the patients were calculated as a result of the evaluation of these 12 clinical features. In addition, since the symptom of arthralgia would be common in patients with FM and could lead to misinterpretation of the results, the BDCAI values were also calculated on 11 clinical findings without considering the arthralgia symptom and compared between the groups. The patients' and clinicians’ perceptions of disease activity were evaluated separately with two questions. A Likert scale represented by a 'smiley face' was used in these questions. In this scale, clinicians’ and patients' perceptions of disease activity in the last four weeks were graded with seven different facial expressions ranging from very good to bad. According to these perceptions, patients’ perception of disease activity (PPDA) and clinician’s overall perception of disease activity (CPDA) were scored between 1-7 points.

The ACR alternative criteria were used to classify FM.[22] Alternative criteria were derived from Symptom Impact Questionnaire (SIQR) symptoms and the 28-area pain location inventory (PLI). In SIQR symptoms, each of the intensities of the common 10 symptoms of FM over the last seven days was graded over 10 points by the patients. The SIQR symptoms score was obtained as half of the total score obtained from the SIQR. In PLI, the patients were asked about 28 specific locations in the body in which they defined persistent pain in the last seven days. The total number of painful locations is the pain location score of the patient. A patient fulfilling the following was defined as having FM: SIQR symptom score ≥21, pain location score ≥17 and symptoms and pain locations persistent for at least three months. Patients were grouped according to the presence of FM, and the activity of BD was compared between the groups.

In many rheumatic diseases, FM is associated with disease activation.[13,14] However, the results of studies evaluating the relationship between FM and disease activity in Behçet's patients are conflicting.[17-20] Melikoglu and Melikoglu[17] and Lee et al.[18] have found no association between FM and disease activity in Behçet's patients. However, in the study of Haliloglu et al.,[19] the frequency of FM in other rheumatic diseases and its relationship with disease activity were evaluated and disease activity was found to be higher in Behçet's patients with FM than in non- FM patients. In addition, in the study of El-Rabbat et al.,[20] BDCAF score was correlated with the widespread pain index. It may not be accurate to evaluate the relationship between disease activity and FM in patients with BD without sex discrimination since FM is common in females while BD is more active in males.[3,21] In this study, we found that BD activity was significantly higher in patients with FM than patients without FM. Since FM patients will suffer from arthralgia, we also calculated BDCAI and compared it between the groups ignoring the arthralgia, which is one of the parameters used to evaluate the activity of BD. The disease activity of BD was significantly higher in the FM group, even if the symptoms of arthralgia were not considered. In addition, both the clinicians’ and the patients’ perceptions of disease activity were significantly higher in BD patients who also had FM. As a result of studies conducted in the last 10 years, the opinion that FM is not an inflammatory disease has changed to the opinion that FM may have some relationship with inflammation.[8-12] In some studies, interleukin (IL)-6 and IL-8 levels were found to be high in FM compared to healthy controls and there are many studies showing that these cytokines are also increased in BD.[29-31] In addition, a study with a small sample size has demonstrated that patients with FM showed a reduction in T-helper-2 (Th2) cytokines, such as IL-4, IL-5 and IL-13.[32] In the literature, there are also data showing the increase of Th2 cytokines in BD.[33,34] We know from the data to date that FM is common in BD and according to the data obtained from this study, disease activation is higher in the presence of FM in female patients with BD. Perhaps the presence of FM contributes to inflammation, leading to increased disease activity in BD. Further data on this subject are needed to clarify whether FM contributes to inflammation in BD.

This study has some limitations. Firstly, it was performed with a limited number of patients and the results should to be confirmed by further studies with larger sample size. Moreover, considering that sex affects the activity of BD and the frequency of FM in Behçet's patients differently, and that there may be different pathogenetic processes according to sex, we conducted our study only on female patients. Thus, we do not know if the same results would be obtained in male patients with BD, which was a limitation. Furthermore, in this study, the activity of BD was measured using BDCAF and the fact that we did not measure other markers of inflammation to assess disease activity was another limitation. Also, the lack of assessment of body mass index and smoking, which may affect inflammation, when comparing disease activation in Behçet's patients with or without FM was another limitation.