Results: Patients in OD group showed significantly higher achievement percentage of ACR20 at week 24 than the PD group (76.6% vs. 30.3%, p<0.001). The evaluation of DAS28 was significantly improved in OD patients compared to PD patients at weeks 12 and 24. Most of the occurred AEs were mild or moderate and considered unrelated to study treatments.

Rheumatoid arthritis (RA) is a chronic autoimmune disease characterized as joint synovitis. Its manifestations include long-term joint damage, persistent pain, functional impairment, and disability.[1,2] RA is the most common adult polyarthritis,[1,3] with estimated global prevalence of 0.35% and 0.13% in females and males, respectively.[2] Prevalence of RA rises steeply after age 45 and the peak is shown at the age of 70.[1] Asians have lower prevalence than Europids (0.16% vs. 0.45%).[2] RA incurs substantial burdens of disease and disability, which are positively associated with population growth and aging.[2] RA treatment is an important healthcare issue in the world, particularly in Asia, one of the world’s fastest-aging regions.[4]

Besides DMARDs, biological agents including anti-TNF monoclonal antibodies (infliximab) and the TNF inhibitors (etanercept) are also used for RA treatment.[3] Etanercept is a soluble recombinant TNF-receptor p75 fusion protein (TNFR:Fc) that sequesters extracellular TNF-α to abate signal transduction,[11,12] which has been approved for treating RA in the United States, Europe, and Taiwan. Although opinercept is structurally similar to etanercept except for two amino acid differences in the immunoglobulin-G1 heavy chain,[13] its benefit for RA treatment is still lacking. In the previous phase I/II trials, opinercept has been demonstrated to have acceptable safety and tolerability and improved clinical responses in patients with RA,[14,15] warranting a corroborative phase III study. Thus, in this study, we aimed to evaluate the efficacy and safety profile of opinercept for RA patients undergoing DMARDs therapy.

Participants were screened for eligibility within 14±7 days before randomization. Besides granting consent and being competent to comply with study procedures, other inclusion criteria were: (i) age ≥20 years with RA functional class I-III by American College of Rheumatology (ACR) criteria for ≥6 months; (ii) currently active disease with at least six tender joints and swollen joints; (iii) erythrocyte sedimentation rate (ESR) ≥28 mm/hour and/or C-reactive protein (CRP) ≥10 mg/L; (iv) ≥8 weeks of prior treatment with stable doses of methotrexate, hydroxychloroquine, sulfasalazine, leflunomide, or azathioprine pre- enrollment.

This study excluded patients (i) with active autoimmune diseases besides RA requiring immunosuppression, documented fibromyalgia, or another joint inflammation disease; (ii) known or suspected to have pulmonary tuberculosis or another infectious disease, seropositive for human immunodeficiency virus, or hepatitis viruses B or C; (iii) adjudged to show persistent signs of immunosuppression; (iv) with a medical history deemed to confer unacceptable risk of significant adverse events (AEs); (v) with known hypersensitivity to etanercept or opinercept or their constituents; (vi) unsuccessfully treated with TNF inhibitors; (vii) with serum alanine/aspartate aminotransferase >three times of the upper reference limit, creatinine >2 mg/dL, leukocytes <3,000/mm3, platelets <100,000/mm3, hemoglobin <8.5 g/dL; (viii) immunized with an attenuated live vaccine ≤3 months or Bacillus Calmette-Guérin ≤12 months before enrollment; (ix) of childbearing potential and lactating, with a positive screening pregnancy test, or refusing to use reliable contraception during the study; (x) receiving any other investigational agent within 28 days or five half-lives (whichever longer) before commencing study treatment; (xi) with a history of substance addiction or misuse; (xii) who had already participated in an opinercept trial.

At week zero, investigators numbered consecutive enrollees whose eligibility was reconfirmed, and gave them study medication from the pack carrying their corresponding treatment code, which contained either 25 mg opinercept or a physically indistinguishable placebo solution. The Contract Research Organization generated the treatment codes using a randomization table and gave the manufacturer the encryption list, but masked decryption keys from investigators in sealed opaque envelopes (opened only in an emergency), thereby randomizing subjects blindly 2:1 to receive opinercept versus placebo. Subsequent visits for study evaluations were scheduled every four weeks during the 24-week treatment period, with follow-up at week 26.

Participants would be withdrawn from the project whenever the following criteria were reached, including loss of follow-up, withdrawing consent, serious infection or sepsis, less than 20% of improvement according to ACR criteria (ACR20) by 12 weeks (enabling opinercept non-responders to withdraw or patients receiving placebo to transfer to an opinercept extension study), death, pregnancy, or the necessary situation determined by the investigator to change anti-rheumatic therapy or prescribe prohibited medications in case that further participation detriments the patient’s well-being.

Efficacy assessments were conducted based on rates of improvement by 20%, 50% and 70% according to ACR criteria (ACR20/50/70), and changes from baseline in: disease activity score-28 (DAS28), ACR 66/68 count for tender and swollen joints, pain visual analog scale (VAS), patient and physician global assessments, Health Assessment Questionnaire-Disability Index (HAQ-DI), and levels of ESR and CRP. The primary efficacy endpoint was ACR20 response at week 24. Exploratory endpoints included ACR20 at week 12 and ACR50 and ACR70 at weeks 12 and 24; and change from baseline to weeks 12 and 24 in DAS28, and the other efficacy metrics.

Based on trials of etanercept, ARC20 rates of approximately 60% in patients receiving opinercept and 27% in controls were anticipated,[16,17] in which 50 patients of OD group and 25 controls would be required to detect significant superiority of opinercept versus placebo with 90% power at a one-sided significance level of 0.025. Presuming 20% of discontinued rate, we randomized 90 patients with the ratio of 2:1 to OD and PD group, and ultimately achieved 75 evaluable patients. The intention-to-treat population was defined as all randomized patients who received ≥1 dose of study medication, regardless of compliance to the study protocol. 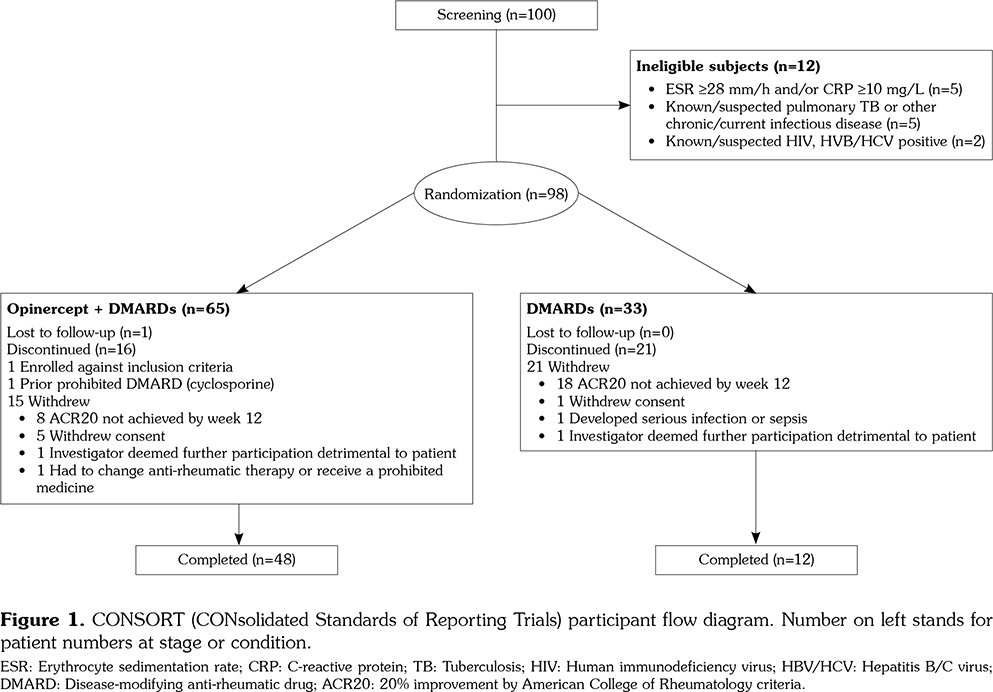 There was no notable between-group difference in baseline characteristics (Table 1). Almost all subjects were Taiwanese/Chinese, predominantly female and middle-aged. Patients were roughly evenly distributed to three classes of global functional status. The most frequently prescribed DMARDs for patients during study were hydroxychloroquine (71.4%), methotrexate (58.2%), sulfasalazine (25.5%), and leflunomide (20.4%).

Patients in OD group received significantly higher proportions of ACR20 responses than those in PD group at all time points (p<0.001) (Figure 2). Likewise, patients in OD group also had relatively higher proportions of ACR50 responses throughout the study compared to PD group at weeks 12 and 24 (p≤0.01). Although lower, ACR70 response rates showed a similar pattern as shown in ACR20 and ACR50, with statistically significant differences at weeks 12 and 24 (p<0.05). 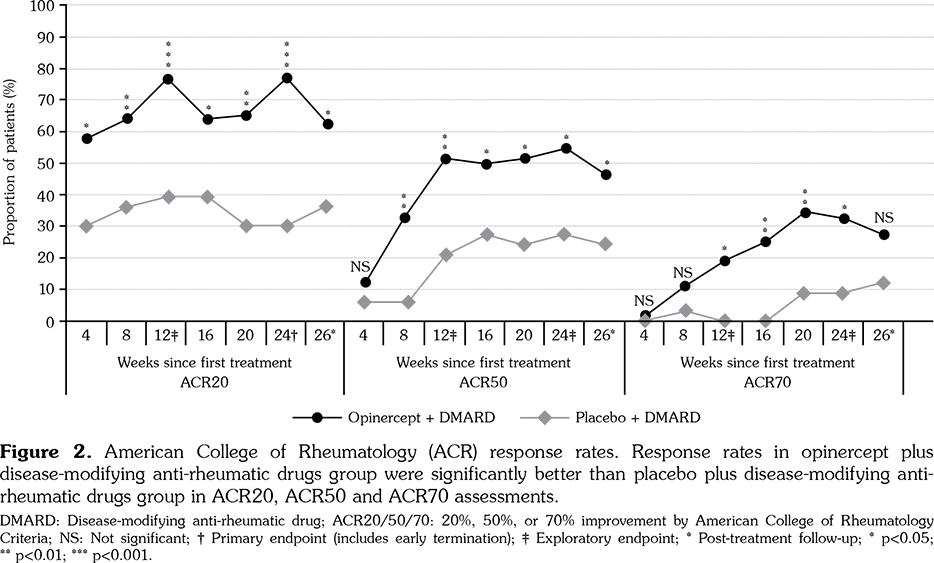 Changes in physician and patient global assessment and HAQ-DI scores were significantly greater in patients in OD group than those in PD group at week 12 (p<0.05), but not at week 24 (Table 2).

Each treatment group showed a similar incidence of AEs (Table 3). More than 95% of AEs in either group were mild or moderate, and most were not attributed to the study treatments. Three AEs which were highly likely related to opinercept treatment were delayed wound healing, urinary tract infection (UTI), and a herpes simplex outbreak. The only severe AE in the placebo arm was tuberculosis of the knee-joint, possibly treatment-related. The most common class of AE in either treatment group was infections and infestations, among which UTI and upper respiratory tract infection were the only specific AEs that affected more than 5% of patients in the placebo arm.

No patients died. In OD group, four patients had five serious adverse events (SAEs), but only one with a fracture due to a fall was rated as severe, which was not drug-related. One moderate SAE of fever due to UTI was possibly drug-related. One mild SAE was fever due to suspected pneumonia, which is unlikely to be drug-related. The other two mild SAEs were poor wound healing and UTI, which were highly-probably drug-related. On the other hand, there were two moderate SAEs in PD group, which were intermittent shortness of breath and multiple closed rib fractures, both were considered unrelated to study drugs.

Results of hematology, biochemistry, urinalysis, vital signs and physical examinations in both groups were generally stable and within their normal ranges, and changes from baseline were mostly slight without clinical significance. Antibody against opinercept was not detected.

This study provides new data on TNFR:Fc therapy in Asian patients with RA, which are commensurate with outcomes in other studies of etanercept plus DMARD therapy, including some involving Asian subjects.[20-23] Opinercept plus DMARDs was superior to DMARDs alone for treating RA in Taiwanese/Chinese patients, with acceptable safety. These results support the evidence-base for local registration.

Opinercept inhibits TNF-α signaling in the same way as etanercept. Since the subjects in this study had generally similar characteristics to those in previous etanercept trials in terms of age, sex, and prior RA treatments, albeit with relatively short duration of RA,[17] it is valid to compare the findings in this study with those of similar studies with etanercept. The efficacy outcomes of opinercept were very similar to those in a 52-week comparative study of etanercept versus methotrexate in patients with active RA in Japan, in which the response in ACR20, improvements in DAS28, and ratio of tender or swollen joints were 79%, 43% and 74%, respectively.[22] The improvement of HAQ-DI between OD and PD groups in this study was also comparable with that reported for etanercept plus methotrexate versus methotrexate combined with other DMARDs.[23] Therefore, clinical outcomes in this study are probably generalizable beyond this study cohort.

Patients treated with opinercept had significantly higher ACR20, ACR50 and ACR70 rates at all time points (Figure 2). Compared with previous reports, improved ACR responses in OD group versus PD group were evidently earlier, from week four onward. With regards to the rate of withdrawals, patients in PD group had four times higher rate due to failing to achieve ACR20 by week 12 compared with the patients in PD group. Following early peak activity, ACR response rates appeared to plateau from around week 20, as also occurs in study of etanercept.[17] Treatment of opinercept plus DMARDs was also more efficacious than DMARDs alone in this study in slowing joint damage and disease progression, with faster treatment responses and relative improvements after 24-weeks’ treatment.

Treatment with opinercept plus DMARDs was generally well-tolerated, with no unexpected safety findings as in the treatment with DMARDs alone. Most of the AEs were mild and were considered unrelated to study treatment, with similar patterns of severity and causality in both treatment groups, in common with etanercept. The most frequent AEs were infections and infestations, which might be due to the immunosuppressant activity of opinercept which potentially compromises resistance to infections. More than 5% of patients in each treatment group had UTIs, and more than 5% in the PD group had an upper respiratory infection. However, patients in OD group showed slightly lower incidence of UTIs and upper respiratory infection than those in PD group, indicating that adding opinercept neither increased the risk of infections, nor exacerbated them. Although three SAEs in two patients were suspected to be associated with the use of opinercept, these patients were fully recovered. Other safety outcomes were comparable between treatment arms, suggesting no clinically significant risk from adding opinercept to DMARDs.

This study reflects the efficacy and tolerable side effects of the combination therapy of TNFR:Fc and DMARDs in RA patients, which has been a standard regimen as recommended in the international guidelines.[24] However, even with the multiple imputation for the missing data, due to the higher withdrawal rate in the placebo arm because of the non-achievement of ACR20, the efficacy in treatment group might be underestimated.[19] This potentially explains why some exploratory endpoints were significant at week 12 but not at week 24.

In conclusion, administering opinercept concurrently with DMARDs was significantly superior to DMARDs alone in slowing disease progression and ameliorating clinical symptoms in patients with active RA. Combination therapy was well-tolerated, with an acceptable safety profile. These findings support the rationale for adding opinercept to conventional DMARDs for RA treatment, which contributes a more effective way and benefits patients’ quality of life.