Keywords: Citation: İlgen U, Küçükşahin O. Additional Benefit of Canakinumab on Proteinuria in a Case With Muckle-Wells Syndrome in Remission Under Anakinra. Arch Rheumatol 2020;35(1):149-150.

We previously reported a case of amyloidosis secondary to Muckle-Wells syndrome (MWS).[1] Briefly, it was a 26-year-old female patient with periodic fever, nephrotic syndrome and sensorineural hearing loss. Mild conjunctivitis and arthralgia-myalgias during attacks were the accompanying features. Inter-attack serum acute phase reactants were elevated with peaks during attacks. Kidney biopsy revealed amyloid A amyloidosis and a clinical diagnosis of MWS was established. No mutation was detected in CIAS1 gene and no family history was present. She responded well to treatment with anakinra after which 24-hour urinary protein decreased from 6.1 to 1.2 g and remained stable thereafter (Figure 1). Periodic fever, increased acute phase reactants and serum amyloid A (SAA), hypoalbuminemia, edema and other disease features resolved completely as well, except hearing loss which needed a cochlear implant to be corrected. After 18 months of treatment with anakinra, 100 mg (2 mg/kg) per day subcutaneously, the patient complained of difficulty with daily injections impairing drug adherence and the anti-interleukin-1 therapy was switched to canakinumab, 150 mg/month subcutaneously. Interestingly, proteinuria decreased further to almost normal levels (around 200 mg/day) after the switch (Figure 1). She is now being followed-up under treatment with canakinumab without any sign of disease activity and normal serum C-reactive protein (CRP) and SAA levels. 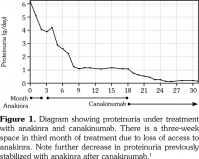 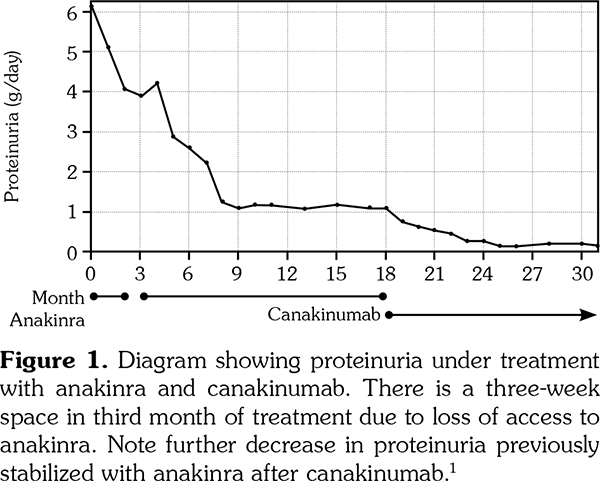 Actually, a clinical and laboratory remission, the eventual goal of the treatment, was achieved with anakinra. She was in remission, both under anakinra and canakinumab, according to disease activity score proposed by Kümmerle-Deschner et al.,[2,3] defined as a score less than 5 and normal serum CRP and SAA levels. In the absence of any clinical and laboratory sign of ongoing inflammation under anakinra, it is interesting for proteinuria to decrease further with canakinumab, although it was previously shown that anakinra-resistant cases may benefit from canakinumab and more patients achieved remission under canakinumab compared to anakinra.[3,4] Furthermore, to our knowledge, no case of canakinumab- resistant autoinflammatory disease, responsive to anakinra was reported to date. These observations are possibly due to the difference in half-lives and mechanisms of action between the two interleukin-1 blocking agents and may reflect an issue of efficacy. In case of amyloidosis secondary to MWS, ongoing proteinuria, even if stable and not accompanied by increased acute phase reactants, may reflect ongoing subclinical inflammation and can be reversible. A repeat kidney biopsy was not performed in the presented case due to the risk of bleeding, absence of any benefit for the management, and the previous reports of persistence and even progression of amyloidosis despite the improvement in inflammatory disease features and proteinuria.[5]

In conclusion, canakinumab seems to be more efficacious in MWS-related amyloidosis even in those who would achieve remission with anakinra. Mechanisms of anakinra escape and response to anti-inflammatory therapy in cases with amyloidosis are yet to be clarified in the field of autoinflammatory diseases.