Objectives: This study aims to investigate the validity and reliability of the Turkish version of the Musculoskeletal Health Questionnaire (MSK-HQ-T) for assessing the general health status in patients with axial spondyloarthritis (ax-SpA).

Conclusion: The MSK-HQ-T is a reliable and valid questionnaire to assess general health status in Turkish patients with ax-SpA.

Axial spondyloarthritis (ax-SpA) is a rheumatic disease with chronic systemic inflammatory and primarily axial skeletal involvement.[1,2] Inflammatory process of the disease always affects entheses, occasionally peripheral joints. Ax-SpA can be sub-classified as non-radiographic ax-SpA (nr-ax-SpA) or ankylosing spondylitis (AS) according to the presence or absence of sacroiliac joint damage on X-ray, by the criteria of the Assessment of SpondyloArthritis International Society (ASAS).[3]

The major clinical features of ax-SpA are insidious onset of back pain and stiffness in early adulthood.[4,5] In addition to pain and stiffness, the disorder presents with fatigue, disturbed sleep, limitation of spinal mobility and chest ex pansion, loss in physical functions and decreased health-related quality of life (HRQoL).[6-9] Because of the heterogeneity of symptoms, monitoring of patients should contain a broad variety of assessments,[10] including patient-reported outcome measures (PROMs), laboratory tests, clinical findings and imaging.[11]

Patient-reported outcome measures in spondylarthritis, particularly in ax-SpA, have become a rapidly developing field of evaluation over the last decade. PROMs are frequently applied in many clinical studies and have an important place in the perception of disability situations and patients’ health.[12] In patients with ax-SpA, Bath Ankylosing Spondylitis Functional Index (BASFI) and Bath Ankylosing Spondylitis Disease Activity Index (BASDAI) are often used to measure physical function and disease activity, respectively.[11] In addition, HRQoL is often assessed by using the well-known Short Form 36 (SF-36).[6] Although ax-SpA may present with a variety of musculoskeletal (MSK) findings in more than one region in the body, a specific clinical tool that provides a holistic view is lacking.

The Arthritis Research UK Musculoskeletal Health Questionnaire (MSK-HQ) was published in 2016 by Hill et al.[13] and constructed in English. It was developed as a MSK outcome measurement tool for patients with different MSK conditions. To our knowledge, there is no cross-cultural adaptation of MSK-HQ in other languages. In this study, we aimed to investigate the validity and reliability of the Turkish version of the Musculoskeletal Health Questionnaire (MSK-HQ-T) for assessing the general health status in patients with ax-SpA.

Prior to the study, permission was obtained from The Oxford University Innovation Ltd. who developed the original questionnaire. This study was conducted at Ankara Yıldırım Beyazıt University Hospital, Department of Physical Therapy and Rehabilitation, between November 2017 and January 2019. The study protocol was approved by the Ankara Yıldırım Beyazıt University Hospital Ethics Committee (September 2017, No: 635/08). A written informed consent was obtained from each patient. The study was conducted in accordance with the principles of the Declaration of Helsinki.

The five-stages of translation-back translation method described by Beaton et al.[14] was used in the process of the cultural adaptation and translation of the MSK-HQ-T. In the first stage, the questionnaire was translated into Turkish by two native Turkish speakers (a physiotherapist and an English linguist) who speak English very well. They performed the translation process independently of each other. At the second stage, these translations were transformed into one single translation. Two official translators who were unaware of the original version and who speak Turkish very well translated back the MSK-HQ-T into English, in the third stage. The consistency between the translated English version of the questionnaire and the original version was assessed by a team consisting of a physiotherapist, an English linguist, two certified translators and a methodologist at the harmonization stage. The questionnaire was analyzed by the Turkish linguist for any differences in meaning, possible ambiguities and mismatches. The questionnaire’s translation was completed. After that, the clarity form was applied to 15 patients and 15 healthy participants in order to determine the level of comprehension for each item. All items of the final version of the questionnaire were comprehensible by healthy and patient participants. The Appendix represents the final version of the MSK-HQ-T.

The study included 105 patients who were diagnosed with ax-SpA by rheumatologists according to the ASAS criteria.[3] Five patients who could not complete the questionnaire were excluded (Figure 1). Patients who were unable to speak or understand Turkish, those aged under 18 or over 65 years, those with cognitive impairment, and those who had both ax-SpA and fibromyalgia were excluded. Thus, 100 patients (42 males, 58 females; mean age 40.3±9.1 years; range, 18 to 65 years) answered MSK-HQ-T, Turkish version of BASDAI (BASDAI-T), Turkish version of BASFI (BASFI-T) and Turkish version of SF-36 (SF-36-T). For test-retest reliability, MSK-HQ-T was performed again five-seven days later. Patients answered all questionnaires in the same order and continued to use their general medications between the measurements.

The MSK-HQ was developed in 2016 to create a single MSK questionnaire measure for patients with different MSK diseases.[13] The MSK-HQ is composed of 14 items which evaluate the holistic impact of different MSK diseases on a person’s health over the last two weeks, regardless of the location of their MSK pain. These items consist of the severity of stiffness/pain (during the day and night), physical function (washing/dressing and walking), level of physical activity, symptom interference (with daily routine, work and social activities), needing help, trouble with sleeping, low energy/fatigue level, emotional well-being (mood and anxiety), understanding of treatment and diagnosis, confidence to self-management, independence and general impact of symptoms. All 14 items have five responses, coded from ‘not at all’=4 to ‘extremely’=0, except for items 12 and 13. Total MSK-HQ scores range from 0 to 56, and higher scores indicate better MSK health conditions. A 15th item, which assesses physical activity in the past week, is not included in the total score and was therefore not considered in the current analysis.

The BASDAI was used to evaluate disease activity (range, 0-10, with higher values indicating more active disease).[15] The BASDAI, composing of six items, includes patient-perceived levels of peripheral joint pain and swelling, back pain, localized tenderness, fatigue, and the severity and duration of morning stiffness. The reliability and validity of Turkish version of the BASDAI have been reported.[16]

The HRQoL was assessed using the SF-36 of which the validity and reliability for the Turkish version have been performed.[19] It contains eight subscales including bodily pain, vitality, physical and social function, physical and emotional role, general and mental health. The SF-36 subscales were calculated according to specific scoring systems and each subscales was scored from 0 to 100, with 100 expressing the best health condition.[20]

The statistical analysis of the collected data was performed using IBM SPSS version 21.0 software (IBM Corp., Armonk, NY, USA). Distributions of continuous variables were evaluated using the Shapiro-Wilk test. The data were summarized with mean±standard deviation, median (minimum- maximum), or count (%). Statistical significance level was accepted as p≤0.05. Convergent validity of the MSK-HQ-T was performed by defining its relationship with the BASDAI-T, BASFI-T and SF-36 scores. Pearson’s correlation coefficient was calculated to assess the relationship between the BASDAI-T, BASFI-T and MSK-HQ-T. Spearman’s correlation analysis was performed to determine the relationship between the SF-36 and the MSK-HQ-T. The Pearson’s/Spearman’s correlation values in the range of 0.81-1.00, 0.61-0.80, 0.41-0.60, 0.21-0.40, and 0-0.20 were considered excellent, very good, good, fair, and poor, respectively. The internal consistency of the multi-item subscales was evaluated by Cronbach’s alpha. A Cronbach’s alpha value ranging from 0.70 to 0.95 was considered to be adequate.[21] Reproducibility was assessed through test-retest reliability using Spearman’s rank correlation coefficient.

The present study has confirmed that MSK-HQ is compatible with the Turkish language and a reliable and valid PROM. MSK-HQ-T demonstrated high correlation with BASDAI-T, BASFI-T, and SF-36 subscales. Also, it had high internal consistency and test-retest reliability.

In the literature, there are several questionnaires for the assessment of conditions related to MSK

diseases in clinical practice and research.[22] Previous researches have attempted to define patient-reported outcomes for different MSK diseases; however, they could not produce any list of outcome domains that can assess the general impact for all MSK diseases.[23-25] The International Classification of Functioning, Disability and Health has been developing recommendations for the assessment of different diseases such as ax-SpA, low back pain, rheumatoid arthritis and osteoarthritis. These are the most common domains: pain severity and intensity, physical, social and work functioning, general quality of life and well-being, emotional functioning, understanding of diagnosis and treatment as well as patient satisfaction with treatment.[26] It can be seen that the domains in MSK-HQ are substantially compatible with all of the above recommendations.

Within ax-SpA, PROMs evaluating physical functioning, fatigue, pain, psychological well-being, and HRQoL have, in general, been developed separately and specifically (e.g. BASDAI, BASFI, SF-36).[6,11] However; a MSK health PROM that provides a holistic view across the spectrum of MSK conditions was lacking. The advantage of MSK-HQ over BASDAI and BASFI is that it can assess many MSK symptoms as a whole.

The MSK-HQ-T had negative and significant correlation with BASDAI-T and BASFI-T scores while correlating positively and significantly with SF-36 subscales. According to the values, MSK-HQ-T can be used as a single outcome measure instead of using multiple questionnaires for patients with ax-SpA. In addition, MSK-HQ-T may provide great advantage in clinical and academic research in terms of time saving.

Cronbach’s alpha value in initial development and inflammatory arthritis were found as 0.88 and 0.93, respectively.[13,27] Cronbach’s alpha value of MSK-HQ-T was 0.91. Internal consistency value of MSK-HQ-T demonstrated similarity with initial development and inflammatory arthritis. This indicates the reliability and usability of MSK-HQ in different MSK conditions. Test-retest reliability demonstrated consistency between the two evaluations over time. MSK-HQ-T was performed again five-seven days after for test-retest reliability. Test-retest value of initial development and inflammatory arthritis were 0.92 and 0.73, respectively.[13,27] Test-retest value was defined as 0.96 in MSK-HQ-T, demonstrating that MSK-HQ-T is a reliable questionnaire.

The MSK-HQ-T can be performed as a universal clinical tool that allows to compare different MSK disease burden. Clinicians and researchers may reduce their logistics burden using MSK-HQ-T as a single clinical tool rather than multiple PROMs. In this respect, we believe that MSK-HQ-T and its reliability and validity assessments will be useful and functional for Turkish researchers and clinicians.

There are some limitations of our study. Since there exists no other cross-cultural adaptation, reliability and validity study of any other version of MSK-HQ, data for comparison were not available. Moreover, MSK-HQ-T was only applied in patients with ax-SpA, requiring applications in different MSK conditions in future studies. Another limitation was the small sample size. In addition, responsiveness, which is another important psychometric consideration for clinical questionnaires, was not evaluated for MSK-HQ-T. Thus, responsiveness of MSK-HQ-T should be assessed in future studies.

In conclusion, MSK-HQ-T was determined to be a reliable and valid questionnaire for evaluating general health status in Turkish patients with ax-SpA. 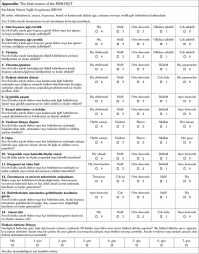 Appendix. The final version of the MSK-HQ-T
× 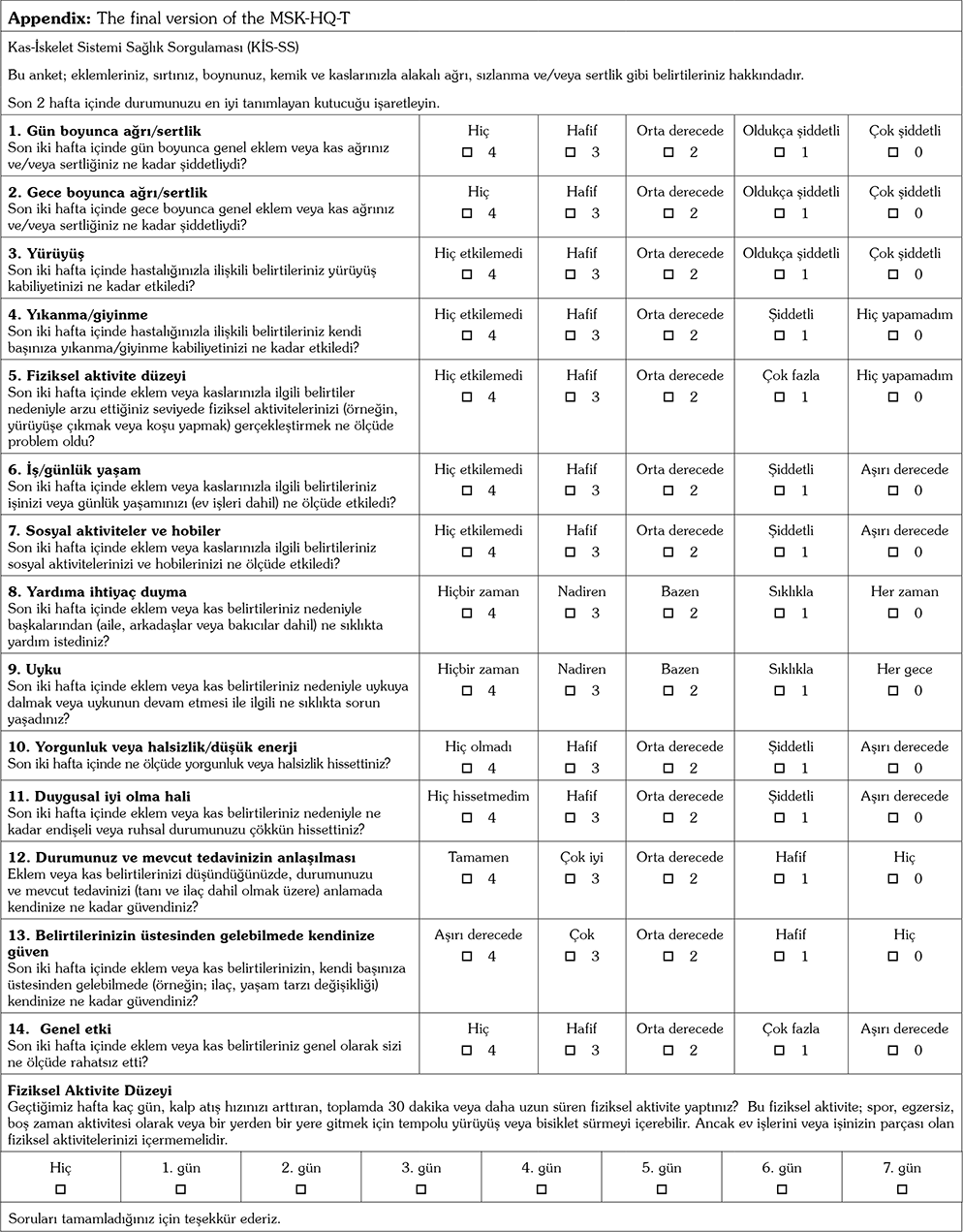