Objectives: This study aims to compare the sensitivity of the intradermal application of the pathergy test with the “three-step pathergy test”.

Conclusion: The three-step pathergy test in patients with BD was found to have higher sensitivity compared with the intradermal pathergy test. The intramuscularly applied pathergy test was the main cause of increase in sensitivity. Further studies are needed to develop new applications of pathergy test that would increase the sensitivity and which are also easy to apply.

Behçet's disease (BD) is a chronic inflammatory disease that presents with mucocutaneous findings and ocular, vascular, articular, neurological and gastrointestinal tract involvement. There is no specific laboratory test for the diagnosis of BD, and the diagnosis can only be established with sufficient medical history and evaluation of the clinical findings. The pathergy reaction, first described by Blobner in 1937, manifests itself by the development of an erythematous papule or pustule at the injection site 24-48 hours after an intradermal puncture.[1] The pathergy test is used as an adjunctive test in the diagnosis of BD and indicates hyperreactivity of the skin. Currently, there is no standardization of the application of the pathergy test and the most commonly used method is the intradermal application of a 20-22 gauge needle at an angle of 45 degrees to at least two different sites on an avascular area on the forearm. Erdem et al.[2] have conducted a study at our department in 1987 about a new application method for the pathergy test, which is known as the “three-step pathergy test”. Taking into consideration the possibility that pathergy test reactions may differ at different times, the pathergy test was applied as intramuscular and intravenous punctures on three consecutive days and the puncture sites were evaluated at 24th and 48th hours. Pathergy positivity was detected among 74% of the patients with this method.

The study was conducted at Ankara University School of Medicine between January 2013 and January 2014 and included 60 patients (23 males, 37 females; mean age 33.9±9.7 years; range, 11 to 57 years) who met the diagnosis of BD regardless of pathergy positivity[3,4] and 100 patients with recurrent aphthous stomatitis as the control group (39 males, 61 females; mean age 32.4±12.1 years; range, 11 to 66 years). Newly diagnosed BD patients and patients who had discontinued the therapy for various reasons were included. Patients using colchicine, anti- inflammatory drugs and immunosuppressive therapies, such as corticosteroids, cyclosporine, and azathioprine were excluded because of their possible effect on pathergy reaction. Patients who had at least one of the following findings at the time of pathergy test application were considered to have active disease: genital ulcer, erythema nodosum-like skin lesion in addition to oral aphthous ulcers and patients with active uveitis, joint involvement, vascular, gastrointestinal or neurological involvement. Three-step pathergy test and intradermal pathergy test were applied simultaneously to each patient. The application sites were cleaned with 70% isopropyl alcohol before each puncture and 20 gauge syringe needle (Ayset Medical Products, Adana, Turkey) was used. The study protocol was approved by the Ankara University School of Medicine Ethics Committee (approval number: 20-651-12). A written informed consent was obtained from each patient. The study was conducted in accordance with the principles of the Declaration of Helsinki.

In three-step pathergy test, intravenous puncture was applied to the antecubital vein and 1 mL saline was injected intramuscularly to upper external quadrant of the glutea on three consecutive days. The puncture sites were evaluated at 24 and 48 hours and pathergy test was considered as positive in the presence of a positive reaction in at least one of the intravenous or intramuscular pathergy sites. The application and evaluation period of the three-step pathergy test was therefore longer and took five days. 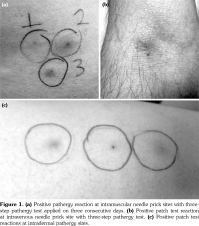 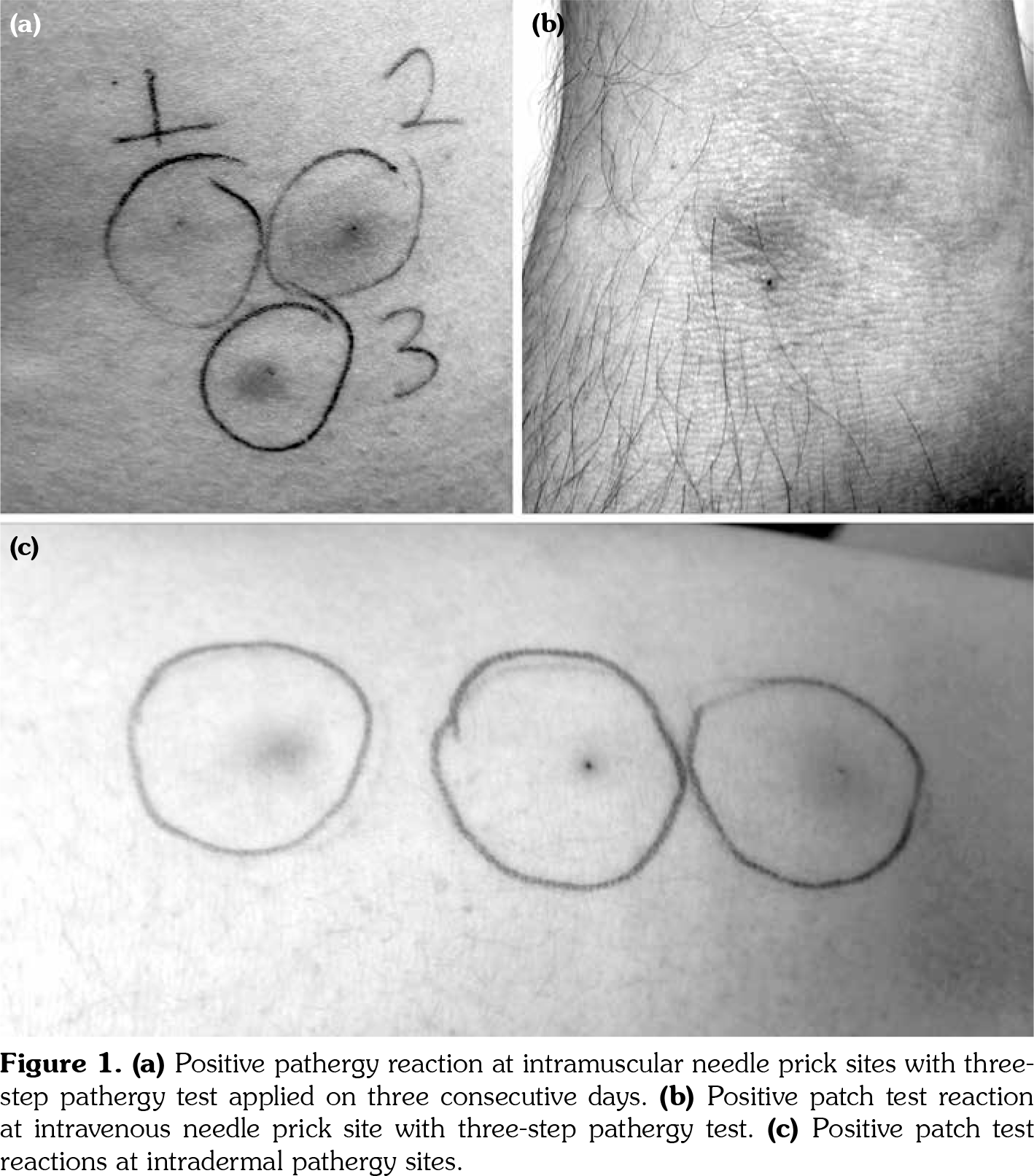 Today, an important problem is the lack of standardization in the application of the pathergy test. Factors such as needle thickness, sharpness or bluntness of the needle tip, number of punctures, and whether or not the test area has been cleaned with an antiseptic have all been shown to affect the positivity rate of the test.[19,21-25] In a study carried out with 270 dermatologists in Turkey, different application methods of pathergy test were investigated and according to the results of this study, 76.1% of physicians used the intradermal method, all of them preferred forearm for the test, 46.9% applied three punctures, most of them abandoned using blunt-tipped needles and 69.7% cleaned the test area with alcohol.[26]

In the intradermal pathergy test, the patients are assessed at 24th and 48th hours and the test is completed within three days. On the other hand, three-step pathergy test is applied over three consecutive days and the test takes five days. While this may increase the sensitivity of the pathergy test, the necessity to visit the hospital for five days may compromise patient compliance and impose application difficulties.