Ankaferd hemostat (Ankaferd Blood Stopper; ABS) is a pro-hemostatic agent affecting erythrocytes. In this article, we report a 50-year-old male patient who presented with a non-healing leg ulcer for one year. He had a past medical history of Behçet’s disease (BD) diagnosed at the age of 29 and therapy was started. Patient's leg ulcer did not respond to any treatment. Topical ABS was applied to the patient's leg ulcer daily. Our experience suggested that local treatment of ABS can be a potentially successful therapy for the management of intractable or incurable chronic ulcers in patients with BD or for other ischemic or vasculitic skin problems.

Ankaferd hemostat [Ankaferd Blood Stopper (ABS), Istanbul, Turkey] is a hemostatic drug affecting red blood cell and fibrinogen interactions.[1] ABS has been used as a hemostatic agent for the management of distinct types of clinical bleedings.[2] In addition to hemostatic functions, anti-inflammatory,[3] anti-infective,[4] anti-fungal,[5] and anti-oxidative[3] effects have been demonstrated for ABS. ABS has also been shown to accelerate wound healing.[6,7] Behçet’s disease (BD) is a thrombotic vasculitis characterized by oral and genital mucous membrane ulcers, uveitis, skin lesions and uncommonly leg ulcers.[8] Leg ulcers are usually associated with vasculitis and/or deep vein thrombosis and refractory to conventional immunosuppressive therapies.[9] In this article, we present a BD patient with leg ulcer who did not respond to conventional immunosuppressive therapy or other topical applications including surgery. Thus, we demonstrated the potential benefit of ABS in the treatment of a leg ulcer associated with BD.

A 50-year-old male patient presented with a non-healing leg ulcer for about one year. He had a past medical history of BD diagnosed at age 29 and therapy was started. During this period, his ulcers in oral and genital area continued to occur frequently. He was diagnosed as BD with recurrent oral, genital ulcers and positive pathergy test.[10] The patient was treated with oral prednisolone (32 mg/day) and colchicine (2 mg/day) after the diagnosis. Oral and genital ulcers relatively improved. A leg ulcer occurred in his right leg after wearing an anti-varicose bandage one year before. For about one year, the leg ulcer did not respond to conventional immunosuppressive therapy (such as prednisolone, azathioprine, cyclosporine, methotrexate, mycophenolate mofetil, rituximab) or tumor necrosis factor (TNF) inhibitors (infliximab). The patient underwent surgical treatment for the leg ulcer and hyperbaric oxygen therapy was applied for his wound. The patient's leg ulcer did not respond to those treatments. When admitted to the general surgery outpatient clinic at age 50, his right lower deep leg ulcers were located between the knee and ankle (Figure 1). His leg ulcer was painful, deep and irregular margined about 10x10 cm. Laboratory studies revealed a white blood cell count of 7.3x103 /μL, hemoglobin level of 10.1 g/dL and platelet count was 317x103/μL. Serum C-reactive protein was 1.92 mg/dL and sedimentation was 11 mm/hour. A written informed consent was obtained from the patient. 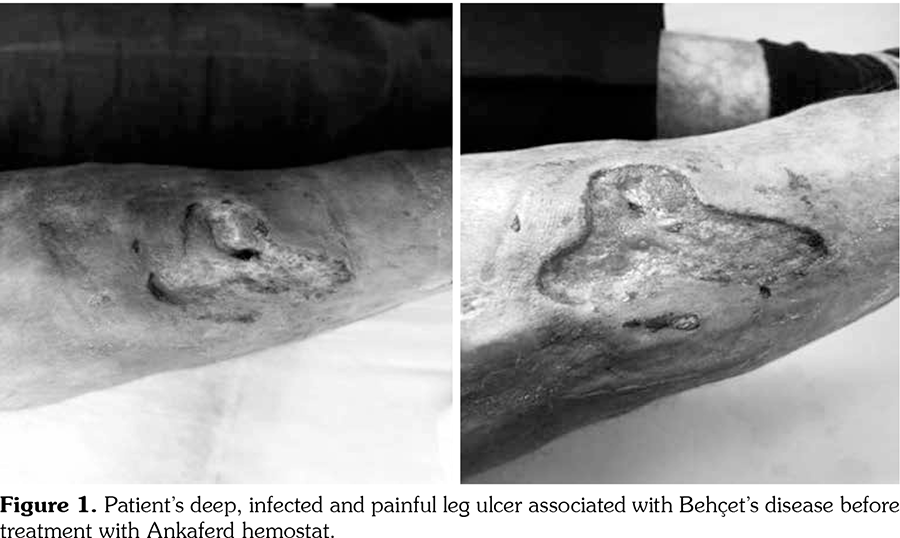 Based upon the patient’s clinical history, characterized by persistence and exacerbation of leg ulcers, and poor response to conventional treatment, we decided to administer topical ABS on his leg ulcer. The patient provided informed consent to receive the ABS local therapy. ABS was applied to the patient's ulcer daily. One month after initiating local ABS treatment, the right leg ulcer was markedly improved (Figure 2). After two months, the ulcer continued to improve. There was no adverse event due to the topical utilization of ABS.

Figure 2. Patient’s leg ulcer after treatment with Ankaferd hemostat. Erythema has almost disappeared, while granulation tissue has been replaced by normal skin. Depth and volume of wound also decreased.
× 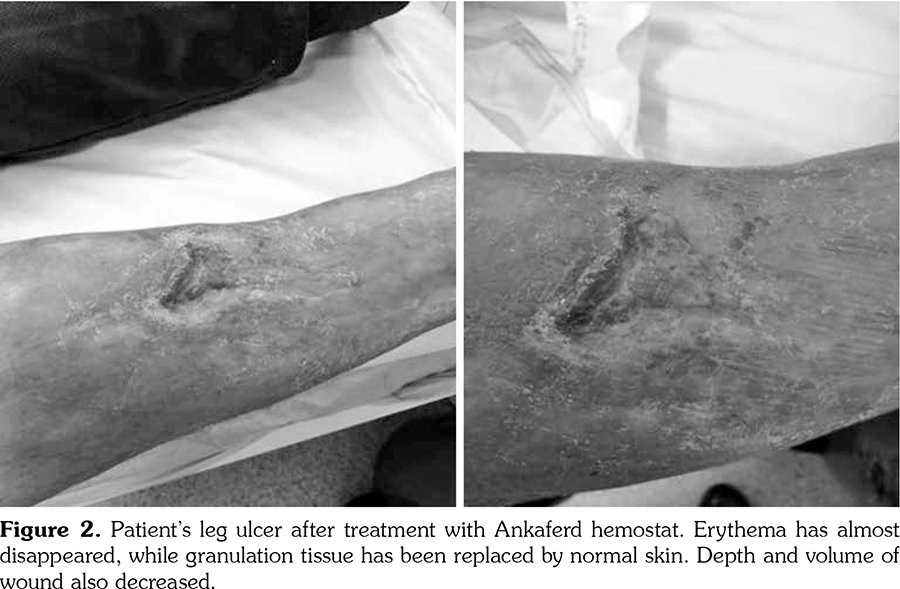 Behçet’s disease is a chronic disease characterized by relapsing vasculitis with oral and genital ulcers, cutaneous inflammation, uveitis, gastrointestinal and central nervous system manifestations.[11] In general, 41 to 97% of BD patients have skin lesions such as aphthous ulcers, genital ulcers, erythema nodosum-like lesions, and papulopustular lesions, while leg ulcers are rare.[9,12] The morbidity of BD is relatively high for chronic intractable ulcers. Appropriate treatment is chosen based on the organs involved and the clinical presentation of the patient.[13] The molecular basis for the pathogenic mechanisms in chronic inflammation has been ascribed to the emergence of immunosuppressive biological therapeutics targeting TNF-alpha (α).[14] The potential beneficial effect of ABS might be associated with reduced TNF-α in this case. Buyuktiryaki et al.[15] demonstrated that ABS reduced oxidative stress by enhancement of antioxidant activity. ABS was associated with remarkably lower TNF-α and interleukin-1 beta (β) levels, significant improvement in histopathological findings and reduced apoptosis. Their findings indicated that ABS protects against intestinal damage due to its antioxidant and anti-inflammatory properties.[15] In a clinical study, Patiroglu et al.[16] disclosed the mucosal healing effects of ABS. ABS is effective in the prophylaxis and treatment of oral mucositis secondary to chemotherapy in childhood cancers. Moreover, Kaya et al.[17] suggested that ABS could be effective for the management of experimental mucositis. Their study results showed that ABS decreased the inflammation, wound diameters, increased wound contraction and tissue fibrosis in burn induced rats.[17] The results of another rat study demonstrated that ABS had a positive effect on second degree thermal burn healing.[18] Aktas et al.[19] explained the mechanism of due to ABS. In their study, ABS increased the number of cells anchoring the important markers of soft tissue healing such as collagen type 1, collagen type 3, α-smooth muscle actin, fibronectin, β-2 microglobulin, vascular endothelial growth factor, cyclooxygenase-2 and mononuclear phagocyte marker. They demonstrated that ABS enhanced the accumulation and biological actions of critical molecules representing the essential signals of early wound healing. Molecular responses associated with topical ABS application can be attributed to the ABS-induced acceleration in the healing rate at the early phase of the complicated wound healing process. Recently, we shared our own experience with ABS in a patient with burn skin wounds and showed the effectiveness of ABS for burn healing in a unique case presentation.[20]

In conclusion, ABS had potential wound healing effect for our patient’s leg ulcer associated with BD. Our experience suggested that local treatment of ABS could be a potentially successful therapy for BD patients with intractable and drug resistant ulcers. Anti-inflammatory and antierythroid aggregation effects of ABS are thought to be effective in the wound healing process since effective hemostasis is the first part of the process.