Evaluation of Olfactory Bulb Volumes in Patients With Rheumatoid Arthritis: A Retrospective Study

Olfactory perception plays an important role to provide environmental communication of the human being. Some specific localizations in the central nervous system are specialized for olfactory functions such as detection, perception and identification of the odor. The olfactory bulb (OB) is the first step of transmission of the olfactory pathway, and it is located bilaterally in the olfactory cortex, hypothalamus, amygdala, and basal telencephalon.(1,2) The neural progenitor cells have roles of dynamic changes such as neuroplastic changes and synaptogenesis in the OB in respect of the olfacory functions throughout life as shown in previous animal studies.(3) Some psychiatric and neurologic disorders, including depression, Alzheimer’s disease, schizophrenia, and Parkinson’s disease may be related to olfactory dysfunction or decreased volume of the OB.(4-6) Moreover, decreased OB volume has been shown in some autoimmune diseases.(7-10) Magnetic resonance imaging (MRI) studies have demonstrated decreased OB volumes in patients with olfactory dysfunction as well.(11) Although impaired olfactory functions such as discrimination, identification, and threshold of the odor have been reported by using self-reported olfactory status with subjective olfactory tests in patients with rheumatoid arthritis (RA,12) to our knowledge, OB volumes have not been studied in RA patients yet. Therefore, in this study, we aimed to evaluate OB volume in patients with RA using MRI.

This retrospective and case-control study was conducted at Muğla Sıtkı Koçman University Training and Research Hospital between May 2013 and May 2017. OB volumes of 37 RA patients (6 males, 31 females; mean age 48.6±10.8 years; range, 18 to 65 years) were compared with those of 36 healthy age and sex-matched control subjects (5 males, 31 females; mean age 46.5±6.9 years; range, 22 to 62 years). Subjects who had any of the following criteria were excluded: brain injury or trauma, depression or other psychiatric conditions, endocrinologic problems, neurological disorders, or chronic sinusitis/rhinitis. Subjects older than 65 years were excluded in respect of age-related degeneration of the OB.(13) The study protocol was approved by the Muğla Sıtkı Koçman University Clinical Research Ethics Committee (28.09.2017-16/1). Since the data were obtained retrospectively, this study protocol does not require to obtain written informed consent from the participants. The study was conducted in accordance with the principles of the Declaration of Helsinki.

Olfactory bulb volumes were measured using cranial MRI examinations. Total OB volume refers to the sum of the right and left OB volumes. MRI evaluations were performed with a 1.5-T scanner (GE Healthcare’s Signa HDxt 1.5T MRI scanner, Waukesha, Wisconsin, USA). Images were gained with a protocol of 256x256 matrix and a 24-cm field of view, repetition time=5000 milliseconds (TR 5000 msec), echo time=130 milliseconds (TE 130 msec), number of excitations=2 (NEX 2) and a 5-mm slice thickness. OB volume was computed with the aid of the above images using three dimensional views. The volumetric evaluations were calculated by a 10-year experienced radiologist who was blinded to the subjects. An electronic cursor was used for manually delineating the contours of OB (Figure 1). The surface of the each slice area was calculated in mm2 and all surfaces were added and multiplied by front-back length to obtain a volume in mm3. Mean of the three consecutive measurements was taken into account. The observer established the minimum of the three consecutive measurements for measuring the MRI images. The intraobserver variability was determined at less than 5%. 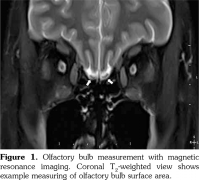 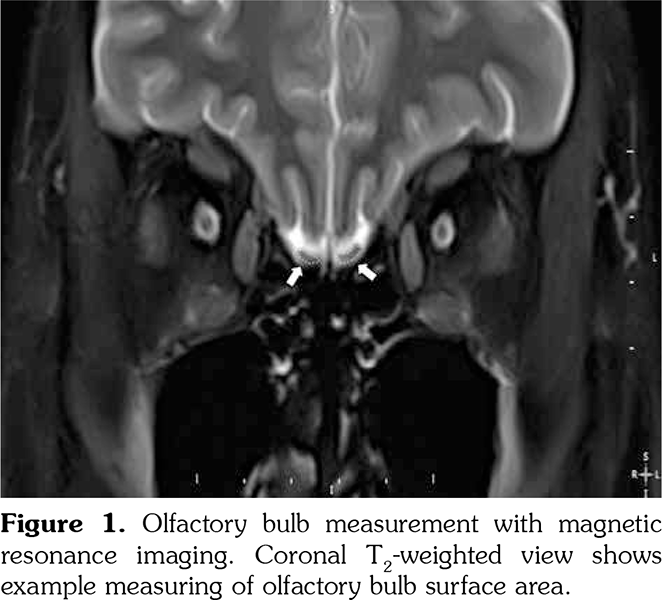 Statistical assessments were performed using the IBM SPSS version 20.0 software (IBM Corp., Armonk, NY, USA). Descriptive data were shown as mean ± standard deviation. Normal distribution was checked with the Shapiro-Wilk test. Independent samples t-test was used for evaluating the statistical differences between the groups and a p value of 0.05 was accepted as statistically significant.

In this study, we aimed to explore whether OB volume of RA patients differ from healthy subjects for the first time in the literature, to the best of our knowledge. The main finding of our study was that RA patients had decreased OB volumes.

Previous studies showed that impaired olfactory and gustatory functions affect adversely the quality of life.(12) In addition, decreased OB volumes are closely associated with impaired olfactory functions (i.e. odor identification, threshold, and discrimination).(11) OB can play a role in the stability of the inflammatory responses of the central nervous system. A significant decrease in interleukin (IL)-10 and increase in IL-1b after bulbectomy have been shown in animal models.(14) From this point of view, an increased inflammatory response of the central nervous system might eventually cause a decrease in OB volumes in RA.

This study has some significant limitations. Our sample size was relatively small and we could not perform analysis for the diagnostic use of OB volume. Lack of performing odor tests (e.g. Sniffin’ Sticks or The University of Pennsylvania Smell Identification Test) is another limitation. Finally, since the data were obtained retrospectively and patients had multiple admissions, we could not obtain sufficient formal and proper data concerning the disease activity, medications, autoantibodies, serologic tests, or systemic involvements.

In conclusion, patients with RA can be under risk of decreased OB volumes and related impaired odor functions which might affect the quality of life and activities of daily living adversely.