Systemic cytomegalovirus (CMV) infection, which is a substantial cause of mortality and morbidity in immunocompromised patients, can be found as CMV syndrome (that can be defined as the presence of clinical disease without end-organ involvement) or a tissue- invasive disease like CMV pneumonitis, retinitis, nephritis, meningoencephalitis, and a wide range of gastrointestinal involvement.[2] CMV colitis complicated with massive bleeding, diffuse ulcers, and perforation have also been reported in patients with GPA;[3-5] although it is a more frequent condition in acquired immunodeficiency syndrome (AIDS), inflammatory bowel disease, and transplant patients.

However, we are not aware of the co-occurrence of tissue invasive CMV disease in a GPA patient with splenic involvement. In this article, we report a patient diagnosed as GPA who has a life-threatening colonic ulcer as a result of CMV colitis and extensive splenic necrosis.

A 49-year-old male patient was referred to rheumatology clinic with general fatigue and fever (38.3°C) for one week. Four years ago, he was diagnosed as GPA based on renal involvement and lower respiratory system findings with a wedge biopsy of the lung that yielded a ‘granulomatous small and middle vessel vasculitis’ and a positive test for serum proteinase 3-antineutrophil cytoplasmic antibody. He had received two courses of rituximab following an induction therapy with pulse methylprednisolone and intravenous cyclophosphamide in the two- year period. He was using mycophenolate mofetil 1000 mg/day and 10 mg of methylprednisolone at the time of his application. A written informed consent was obtained from the patient.

In clinical admission, his physical examination showed no evidence of systemic infection with a body temperature of 37.2°C. Laboratory findings at his first admission were summarized in Table 1. Computed tomography (CT) scan revealed a cavitary lesion of 6 mm in diameter located in the left upper lobe (which was also seen in his previous chest CT) besides a shrunken spleen as a recent finding (Figure 1).

Figure 1. Computed tomography scan of abdomen on admission showing splenic necrosis, a shrunken spleen with irregular contours, (a) in transvers and (b) in coronal images (arrows).
×

On the third day of hospitalization, colonoscopy was performed due to new bloody diarrhea and showed an ulcer of 20x20 mm in diameter at ileocecal valve. Histological examination of the biopsy specimen identified large intranuclear inclusion bodies on the background of granulation tissue suggesting CMV infection, without features of the vasculitis (Figure 2). Serological testing and polymerase chain reaction (PCR) assay revealed positive CMV immunoglobulin M (IgM) and IgG antibodies and CMV deoxyribonucleic acid (DNA) 34,000 copies/mL. Mycophenolate mofetil was stopped and intravenous ganciclovir was given until CMV DNA was negative in the PCR test for two weeks. After clinical recovery, mycophenolate mofetil treatment was resumed. 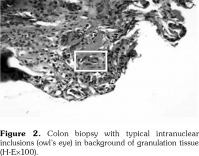 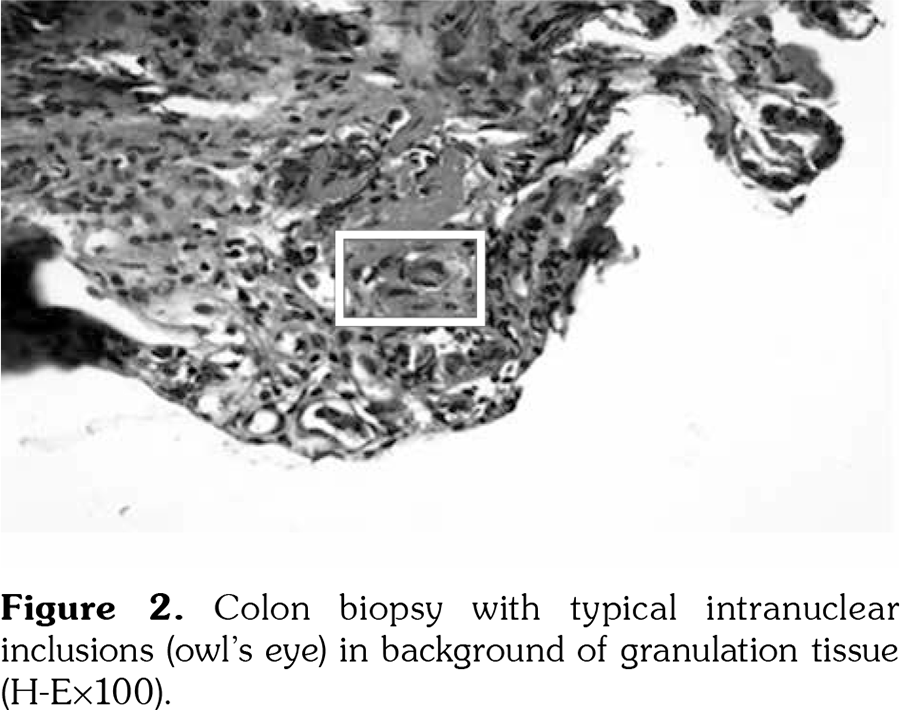 Eight months afterwards, he was hospitalized with a body temperature of 38.3°C and fatigue. On this admission, laboratory examinations revealed high C-reactive protein (4.76 mg/dL) level while no bacterial growth was observed in blood cultures. PCR test detected CMV DNA at 2,400 copies/mL. CT scan of the abdomen showed new abundant nodular infiltration in the subcutaneous-deep facial planes of the abdominal wall (Figure 3). Abdominal subcutaneous fat tissue true-cut biopsy was performed and CMV DNA was detected in the quantitative PCR assay of tissue specimen. He was put on oral valganciclovir treatment while mycophenolate mofetil was permanently discontinued. Following antiviral therapy, azathioprine was started and peripheral blood PCR assay revealed CMV DNA of 57 copies/mL at one month of this treatment. 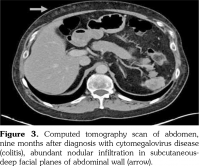 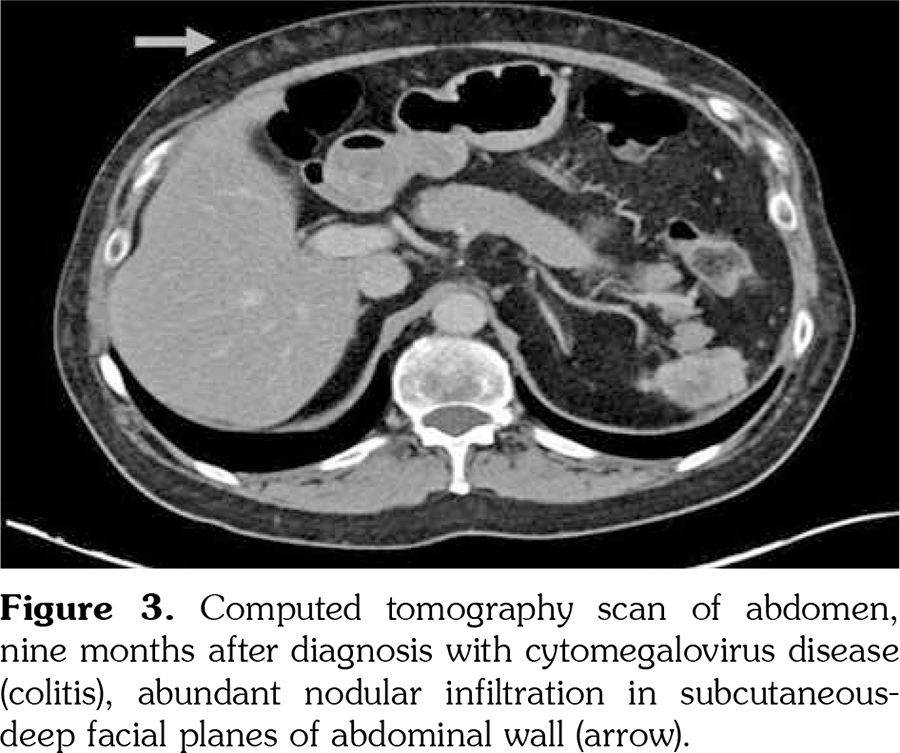 Cytomegalovirus is a member of human Herpesviridae family and it remains latent in the host following an initial infection.[6] Immunosuppressive treatment, including steroids and mycophenolate mofetil, is considered to be a risk factor for CMV infection.[3,7,8]

It was reported that the organ system involvement in CMV infection may vary depending on the underlying cause of the host's immunodeficiency. For instance, pneumonitis is suggested to be more common in bone marrow transplant recipients, while retinitis and gastrointestinal disease may be more common in AIDS patients.[7] As we experienced in our case, ulcerative lesions are the most common pathology[9] while bloody diarrhea is one of the most common initial symptoms of CMV colitis.[7,10] When a GPA patient presents with these findings, CMV colitis should be kept in mind.

Cutaneous CMV infection is a serious but rare condition because of the difficulties in diagnosis[11] In our case, discovering a recent nodular infiltration in the abdominal wall on CT scan and detecting CMV DNA at subcutaneous adipose tissue by PCR helped us to diagnose cutaneous CMV infection.

To date, splenic involvement has been reported rarely in GPA; in fact, it is thought to be underestimated as it is often asymptomatic.[1,12] Spleen pathologies that can be seen in GPA include splenomegaly, capsular adhesion, splenic artery-vein thrombosis, granuloma formation, splenic infarct and hemorrhage, rupture or abscess as a complication of splenic infarct.[1,12] In GPA, splenic infarct occurs as a result of occlusion of the distal part of splenic artery and its branches.[13] In our patient, splenic findings seen in the CT scan possibly improved as a consequence of previous splenic infarctions. Although Doppler ultrasonography of the splenic artery and vein could not be performed, septic embolism was ruled out by echocardiography. Splenic infarct and rupture have also been reported during acute CMV infection.[14] However, in our case, a shrunken spleen, rather than a recent infarct, was detected during CMV colitis, which suggested that spleen involvement could be primarily related to GPA.

Because the risk of infections with encapsulated bacteria increases with splenic necrosis and immunosuppressive treatment further increases this risk,[15] our patient was administered pneumococcal vaccine.

In conclusion, this case showed that GPA and its complications including spleen necrosis and immunosuppressive treatment may increase the risk of systemic CMV infection. Additionally, the course of infection may also be unusual. Considering all these findings, rheumatologists treating GPA patients should keep systemic CMV infection in mind.