Myofascial pain syndrome (MPS) is a common cause of back and neck pain with painful taut bands, characterized by the presence of trigger points leading to motion restrictions, motor dysfunctions, and autonomic changes. Although its etiology is not fully understood, factors such as trauma, fatigue, excessive muscle tension, and structural disorders are considered.(1,2) This syndrome may be the cause of pain alone, or it may be accompanied by other painful syndromes. In addition to pain, symptoms such as weakness and decreased range of joint movement may also occur.(3) Trigger points are often seen in the upper trapezius muscle and cause pain attacks in about 85% of the population.(4) The main objective in the treatment of MPS is to resolve the spasm, reduce the pain, and inactivate the trigger points. While spray and stretch techniques, ultrasound (US), transcutaneous electrical nerve stimulation, and heat packs are used as non-invasive treatments; dry needling, local anesthetics, and botulinum injections are the preferred invasive treatment methods.(5-7) US is a frequently used physical agent in soft tissue lesions, which increases blood flow in tissues with its thermal effect, permeability in membranes, and tissue healing. It also reduces muscle spasms and increases the ability of collagen fibers to grow. In addition to the physiological effects and segmental analgesia with its non-thermal effects, it also has a micromassage effect which enables the movement of interstitial fluid in the tissues.(8,9) Various investigations have been performed about the treatment of myofascial pain; however, there is still a lack of research on the most effective treatment strategies. Although some studies have demonstrated that US treatment for MPS considerably reduces pain intensity, current evidence is not clear enough to support US as an effective method to treat MPS.(10-12) While there is no consensus on treatment, there are many treatment options for MPS. US therapy is a noninvasive, easily applicable, and also a controversial method in the literature. Therefore, in this study, we aimed to evaluate the effectiveness of conventional US therapy in the treatment of MPS.

Fifty-four patients (23 males, 31 females; mean age 29.8±5.2 years; range, 22 to 46 years) with MPS, who were admitted to the outpatient clinic between December 2009 and March 2010, were included in this prospective, randomized, single- blind, placebo-controlled study. Patients who had at least one trigger point in the trapezius muscle, neck and/or backache of less than six weeks and in normal range, and no sign of infection/ inflammatory findings in laboratory tests were included. Patients with cervical disc hernia, presence of radiculopathy or myelopathy, tumoral, infectious, psychiatric, systemic disease, stage 3-4 osteoarthritis, pregnancy, previous brain or shoulder surgery, treatment in the last six months, hormonal or rheumatic diseases were excluded. The study protocol was approved by the Istanbul Physical Medicine and Rehabilitation Education Research Hospital Ethics Committee. A written informed consent was obtained from each patient. The study was conducted in accordance with the principles of the Declaration of Helsinki.

Patients who satisfied the inclusion/exclusion criteria were randomly allocated to an US group (n=27) or placebo group (n=27) by using block randomization. A blind assessor evaluated all study parameter scales before and after treatment.

Patients in the US group were given 1 MHz continuous conventional US treatment at a dose of 1.5 watts/cm2 for five minutes with an US applicator with a 5 cm2 diameter of an Enraf Nonius (Sonopuls 490U, Rotterdam, The Netherlands) US device such that the trigger point is in the center and the device draws intertwining circles on and around the trigger point in one-two seconds. Patients in the placebo group were treated with the same method with placebo US treatment for 10 sessions every weekday while the US device was switched off. No analgesic drug was given to patients during this period. Stretching exercises and range of neck joint movement exercises were shown for upper and middle trapezius and pectoral muscles for all patients. Patients were advised to perform these exercises three times a day for 10 minutes. When they came for the treatment sessions, they performed the exercises under the doctor’s supervision.

Trigger point pain was assessed with the following two criteria:

1) Visual analog scale (VAS): The scale used for the evaluation of pain included a 10 cm line drawn on a horizontal plane on a plain white paper with the words ‘no pain’ on one end and ‘unbearable pain’ on the other end. According to these explanations, patients were asked to mark their pain at rest and on movement on the 10-cm line. Pain was assessed with VAS before and after the treatment.(13)

2) Algometry (dolorimeter): Pressure algometry is a semiquantitative method used to locate tender regions, abnormal sensitivity over muscles and bones, and assess pressure pain sensitivity of tissues. The measurements were performed three times with intervals of 60 seconds and the mean value was recorded as the pressure pain threshold.(14) The severity of the palpable muscle spasm in the affected muscles was assessed on a scale of 0 to 4;(15) (0) no spasm, (1) medium-grade spasm, (2) spasm stronger than medium grade but not limiting range of joint movement, (3) severe spasm limiting range of joint movement, and (4) severe spasm accompanied by postural deviation.

Mean age of the US and placebo groups was 29.8±5.2 years and 31.1±5.7 years, respectively (p=0.400). There were no significant differences in age, weight, height and duration of pain, sex, marital status, economic status, education level or analgesic use between both groups (p>0.05, Table 1). 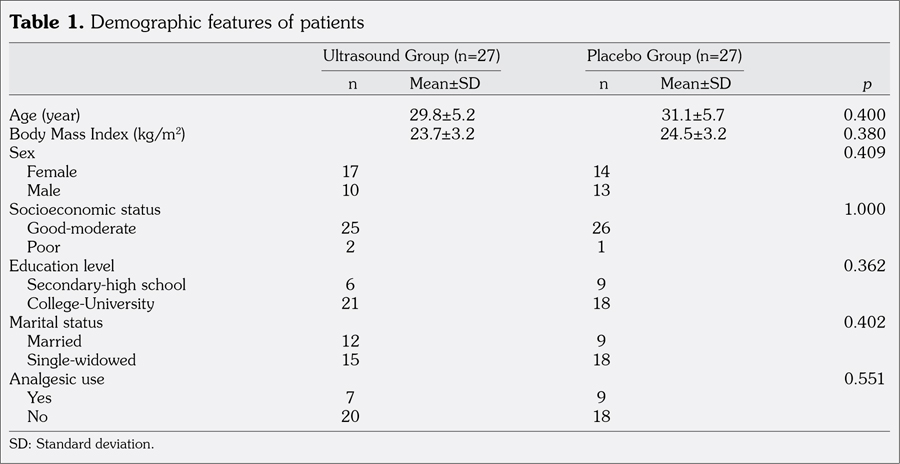 Clinical comparisons of the groups were given in Table 2. There was no significant difference between US and placebo groups in terms of VAS (at rest), VAS (during activity), algometer, BDI, and palpable muscle spasm degree values before treatment (p>0.05).

Table 2. Comparison of pain at rest and during activity, algometer results, palpable muscle spasm degree, Beck Depression Inventory, and Short Form-36 scores between study groups before and after treatment
× 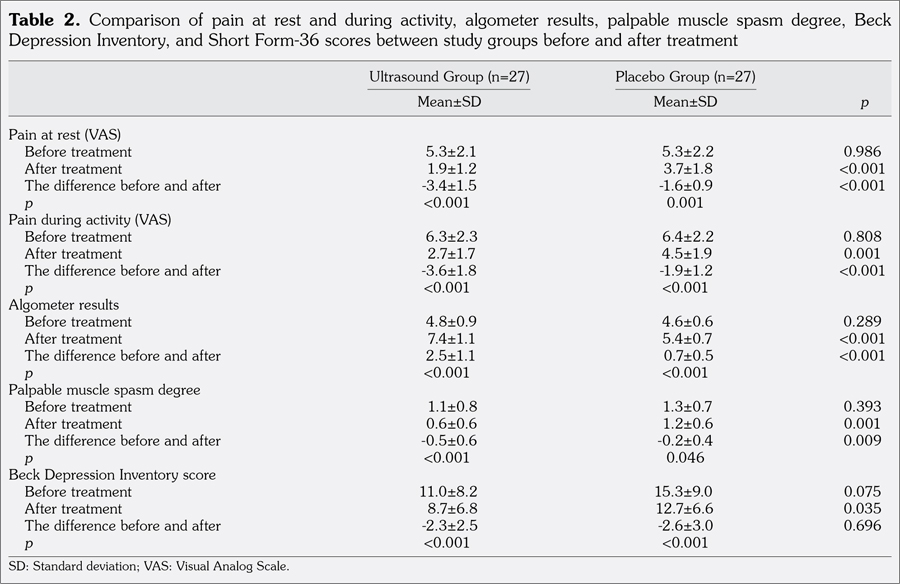 All clinical variables including VAS, algometer findings, palpable muscle spasm degree (PMSD) values and BDI scores improved with treatment in both groups (all p<0.05) when compared to baseline. The improvement percentages in VAS, PMSD, and algometer values were higher in the US group than in the placebo group (all p<0.05) (Table 2). Only the improvement in the BDI scores did not differ between the groups (p>0.05).

In this placebo-controlled, single-blind study, we found that conventional US therapy is an effective treatment for MPS. Various methods are used for the inactivation of trigger points and relaxation of painful taut bands. US, a non-invasive treatment method, is a therapeutic agent commonly used due to its thermal and non-thermal effects. Similarly, in a study investigating US treatment used at the same dose (six minutes, 15 days) and frequency on the upper trapezius trigger points, a significant improvement was observed in pain and muscle spasms measured with the VAS and algometer. In addition, a slight increase was observed in the level of pain, spasms and depression at the third month control.(17) Another randomized controlled study, in which US and placebo treatments were used for trigger points, did not show superiority of the combination of US, massage and exercise over the combination of massage and exercise and placebo US. This study stated that the reason for the difference between two groups was the difference in US dose used, and the combination of massage and exercise.(18)

In our study, analgesic and massage therapies were not applied while both groups were given stretching exercises in addition to US treatment. We think that combined treatment is effective in decreasing pain and palpable muscle spasms in both groups. In a study of 44 patients by Srbely et al.,(19) in which trigger point sensitivity and algometry were initially used, the first group was given US (1 watts/cm2, 1 MHz, five minutes) and the second group was given placebo US; and the measurements immediately after 15 sessions of treatment found improved pain rates of 44.1% and 1.4%, respectively. For MPS, there is no consensus regarding dose, frequency, duration, number of sessions in US therapy. In our study, we used continuous US therapy with 1.5 watts/cm2, 1 MHz, for five minutes and 10 sessions. In a study, Ilter et al.(20) compared continuous US, pulsed US, and placebo US therapies using a frequency of 1 watts/cm2 and 3 MHz with continuous and pulsed US, and found that the effect of continuous US on pain was superior to pulsed and placebo US therapies.

Due to its thermal and non-thermal effects, US can be used for tissue repair, increasing the extensibility of collagen fibers, reducing pain and muscle spasms, as well as changing the permeability of ions through stable cavitation. The degree of these therapeutic activities varies depending on the touch absorbing property, the duration of application, the dosage, and the application scheme.(21,22) Our patients were not given analgesic treatment or anti-depressants. In our study, no significant difference was established between the two groups while decreased BDI values were observed in both groups. Considering that chronic pain leads to depression, we think that depressive symptoms may decrease with pain relief. Based on the effectiveness of the compression and massage treatments applied at the trigger points, the state of well-being in the placebo group can be attributed to the effectiveness of the compression and massage of the US applicator. Massaging plays an important role in the treatment of pain. Massage treatment improves circulation, decreases pain and stress, increases relaxation, and helps general wellness of patients.(23) Furthermore, the influence of intervention, stretching, and range of joint movement exercises and the presence of the patient in the treatment setting may be considered as other features that may increase the effectiveness of the placebo group.

Limitations of this study include the limited number of patients, the single-blind design, and the short-term follow-up period.

In conclusion, our study showed the effect of US, an important deep-heating agent, on pain, muscle spasms, and psychological state in the treatment of MPS. We think that US treatment can be used for trigger points as it is a non-invasive, painless, and easy to use method, suitable for patients avoiding injection therapy. However, we believe that a comprehensive approach including maintaining good posture with stretching and relaxation exercises and lifestyle changes is important in addition to medical treatment and physical therapy for long-term therapeutic efficiency. In future studies, it will be appropriate to examine different US parameters regarding dose, frequency, duration of treatment, and administration sites.