Rheumatoid arthritis (RA) is a chronic inflammatory disease of the synovial joints, which results in cartilage and bone destruction. Several pro-inflammatory cytokines such as tumor necrosis factor-alpha (TNF)-α, interleukin (IL)-1, IL-6, IL-8, and IL-15 are critical for synovial inflammation in RA,(1,2) indeed, treating RA by targeting pro-inflammatory cytokines, including TNF-α, IL-1, and IL-6, has met with some success.(3-5)

Interleukin-33 is a newly described member of the IL-1 family and was identified as a ligand for the orphan receptor growth STimulation expressed gene 2 (ST 2). It plays a role in allergic diseases by activating mast cells and promotes T helper type 2 immune responses.(6,7) IL-33 levels in RA patients are higher than those in healthy controls, and synovial expression of IL-33 is greater in RA than in osteoarthritis, suggesting that IL-33 may be involved in the pathogenesis of RA.(8,9) In addition, blocking IL-33 ameliorates joint inflammation and destruction in mice with collagen-induced arthritis (CIA).(10,11)

We performed a cross-sectional, case control analysis of serum IL-33 and IL-6 levels in 83 patients with RA (10 males, 73 females; mean age 51.9 years; range, 26 to 77 years) and 12 healthy controls (2 males, 10 females; mean age 52.2 years; range, 39 to 62 years) at participating hospitals between September 2009 and December 2010. Of the RA patients, 40 were treated with an intravenous infusion of 8 mg/kg tocilizumab every four weeks for 24 weeks with a stable dose of methotrexate and/or other disease- modifying anti-rheumatic drugs. Therefore, these 40 RA patients were considered the prospective cohort. The 40 patients were then divided into two subgroups as responders and non- responders according to the American College of Rheumatology (ACR) 20. The remaining 43 RA patients did not receive tocilizumab therapy.The study protocol was approved by the Seoul National University Hospital Ethics Committee (C-1302-028-463). A written informed consent was obtained from each patient. The study was conducted in accordance with the principles of the Declaration of Helsinki.

Serum samples were promptly stored at -80°C until the time of cytokine assay. Samples from the 40 patients that received tocilizumab were obtained at two time points: at baseline and 24 weeks after the initial dose was given. Clinical scores and laboratory assay results, including the erythrocyte sedimentation rate (ESR), high- sensitivity C-reactive protein (hsCRP) level, serum rheumatoid factor (RF) level, and disease activity score of 28 joints including the ESR (DAS28-ESR), were obtained at the same time points.

Data are expressed as the mean±standard deviation or median (range) as appropriate. The Mann-Whitney U test was used for group comparisons and the Wilcoxon signed rank test for paired comparisons. Single regression analysis was performed to examine the relationship between serum IL-33 levels and clinical laboratory parameters, and Spearman’s rank correlation coefficients were calculated. The Wilcoxon signed rank test was used to compare values measured before and after tocilizumab therapy. P values <0.05 were considered significant. All statistical analyses were performed using IBM SPSS statistics version 22.0 (IBM Corp., Armonk, NY, USA), and the graphics were generated in GraphPad Prism version 5 (GraphPad, La Jolla, CA, USA). 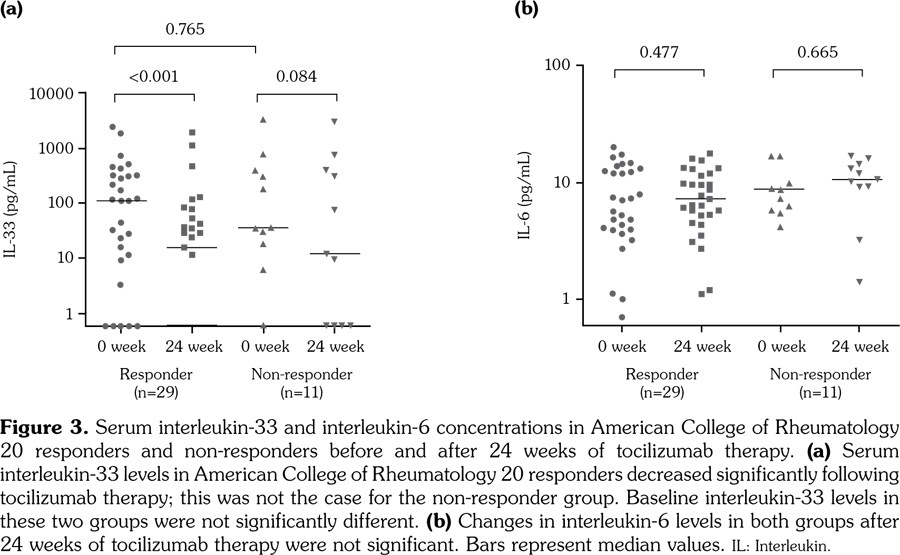 Serum IL-33 and IL-6 concentrations in patients with RA were significantly higher than those in healthy controls. The significant correlation between IL-33 and RF titer suggests that production of the former might be linked to autoantibodies in these patients. IL-33 enhances mast cell activation by immunoglobulin G,(12) as well as inducing human mast cells to release immunomodulatory mediators such as IL-10 and histamine along with other cytokines associated with type 2 immune responses, such as IL-5 and IL-13. IL-33 primes mast cells toward a Th2/immunomodulatory phenotype, a phenotype that becomes more prominent after concomitant activation of mast cells by immunoglobulin G.(12)

Like the majority of IL-1 family members that act as pro-inflammatory cytokines, IL-33 is expected to promote inflammation in RA.(13) Studies of mice with CIA suggest that inhibiting the IL-33 receptor may have therapeutic effects similar to IL-1 inhibition therapy for RA.(14) However, we found no correlation between the IL-33 concentrations and markers of RA disease activity (i.e., the DAS28, ESR, or hsCRP). The link between IL-33 and inflammation in RA may be indirect, and IL-33 levels could be affected by other cytokine cascades such as TNF-α or IL-6. TNF-α stimulates production of IL-33 by synovial fibroblasts,(15) and IL-33 levels decrease after infliximab and etanercept therapy.(16,17) In addition, overexpression of IL-33 increases TNF-α-induced IL-6 secretion by RA-synovial fibroblasts, and IL-33 silencing significantly down-regulates TNF-α-induced IL-6 secretion in vitro.(10) However, we detected no direct correlation between serum IL-6 and IL-33 levels in this study. We did find that IL-33 levels showed a high degree of inter-individual variability, which may (at least in part) account for discrepancies regarding the correlation between serum IL-33 concentrations and RA disease activity.(16-18)

However, to the best of our knowledge, this study is the first to examine serum IL-33 concentrations both before and after tocilizumab therapy. Although the sample size was small, all patients received a stable dose of methotrexate and/or other disease-modifying anti-rheumatic drugs, and we observed a relatively long term response after 24 weeks of therapy. Unfortunately, we did not analyze radiologic progression and therefore cannot present results showing a correlation between IL-33 and joint damage. This is another limitation of this study.

In conclusion, our results revealed that serum levels of IL-33 did not correlate with IL-6 levels. In addition, treatment with an IL-6R inhibitor did not change serum IL-6 levels; rather, it reduced serum IL-33 levels. It is interesting that even in ACR20 responders with decreased ESR and CRP levels, the pro-inflammatory cytokine IL-6 level did not change significantly in the present study. There was a previous report showing that serum IL-6 concentrations are increased after administration of tocilizumab in both healthy volunteers and RA patients and suggesting that free serum IL-6 is increased after tocilizumab therapy because IL-6R-mediated consumption of IL-6 was inhibited by the unavailability of tocilizumab-free IL-6R.(19) Taken together, it is not possible at the present time to explain the response to tocilizumab therapy in terms of serum IL-6 levels; therefore, IL-33 may be a useful indicator of responses to tocilizumab therapy.