Objectives: This study aims to assess the prevalence of generalized joint hypermobility (GJH) in school children in relation to scoliosis and to identify musculoskeletal problems.
Patients and methods: This cross-sectional study included 822 school children (413 males, 409 females; mean age 12.2±1.3 years; range, 10 and 15 years). Demographic characteristics of all children were recorded. The presence of GJH was assessed by the Beighton score (≥4 was considered joint hypermobility). Scoliosis screening consisted of forward bend test (FBT) and measurement of angle of trunk rotation (ATR). Positive FBT or ATR ≥5° was referred to a portable X-ray device. The presence of musculoskeletal complaints was determined by a questionnaire.
Results: Children’s Body Mass Index (BMI) was 19.6±4.1. GJH was diagnosed in 151 subjects (18.4%). No significant association was detected between sex and hypermobility. Joint hypermobility was inversely correlated with age and BMI. Scoliosis was found in 43 subjects (5.2%) and all of them except one girl had mild scoliosis. The most common scoliosis pattern was a single left thoracolumbar curve. Seventy-three subjects (8.9%) had Cobb angle under 10°, with a potential for progression. Among subjects having GJH, the most common clinical finding was pes planus (34.3%) and the most common clinical symptom was ankle sprain (31.3%).
Conclusion: Similar to that found in children from many countries, GJH is a common clinical condition in Turkish children. GJH should be assessed in the differential diagnosis of adolescents with musculoskeletal complaints for effective treatment and reducing morbidity. GJH should be considered in adolescents with scoliosis, which may be an important aspect in treatment.

Generalized joint hypermobility (GJH) presents with increased joint range of motion with simultaneous absence of any other systemic disease and involves proprioception impairment.(1) Epidemiological studies show that GJH ranges from 7 to 53% in different populations.(1,2) Only a few Turkish studies have been conducted to date.(3,4) Determination of GJH may help guide providers toward more favorable management strategies and lifestyle modifications. GJH may cause chronic pain, sprains, pes planus, and many musculoskeletal problems; however, it is likely underdiagnosed.(5) GJH is also a risk factor for developing scoliosis. Scoliosis is characterized by a three-dimensional abnormality of the spine that involves a curvature in the sagittal, frontal, and transverse plane. Most often, this condition has no known cause and is referred to as “idiopathic.” The prevalence of adolescent idiopathic scoliosis (defined as a Cobb angle of 10°) ranges from 1 to 3% among children and adolescents aged 10 to 16 years.(6-9) Adolescent idiopathic scoliosis is generally not thought to cause significant pain or neurological deficits. However, a scoliosis curve can cause trunk imbalances and muscle spasms which can in turn lead to pain.(7,8) Scoliosis curve can worsen rapidly in still-growing children. Therefore, early recognition of scoliosis is essential for growing patients. To our knowledge, this is the first study on Turkish children to evaluate the relationship between GJH and scoliosis. Therefore, in this study, we aimed to assess the prevalence of GJH in school children in relation to scoliosis and to identify musculoskeletal problems.

This cross-sectional study was included 822 secondary school students (5th-8th grades) (413 males, 409 females; mean age 12.2±1.3 years; range, 10 and 15 years) from eight randomly-selected schools in Ankara, capital city of Turkey during the academic term between February 2017 and May 2017. The study protocol was approved by the Yıldırım Beyazıt University, Yenimahalle Training and Research Hospital Ethics Committee. A written informed consent was obtained from each child’s parents. The study was conducted in accordance with the principles of the Declaration of Helsinki.

Scoliosis screening consisted of forward bend test (FBT) and measurement of angle of trunk rotation (ATR) with Bunnell scoliometer. Positive FBT or ATR ≥5° was referred to a vehicle in the schoolyard, equipped with a portable X-ray device. Scoliosis was confirmed by Cobb angle of ≥10°. Curve direction, level and degree were recorded.

Statistical analysis was performed using the PASW version 17.0 program (SPSS Inc., Chicago, IL, USA). Descriptive analysis was performed. The Kolmogorov-Smirnov test was applied to analyze normal distribution. Mann-Whitney U and Chi-squared tests were conducted. A p value of 0.05 was adopted as the level of significance.

Children’s body mass index (BMI) was 19.6±4.1 (range, 11.2-57.1). Generalized joint hypermobility was diagnosed in 151 children (18.4%). When the hypermobile children were evaluated according to sex, there were 84 females (10.2%) and 69 males (8.4%). No significant difference was detected between sexes (p=0.93). The difference between normal and hypermobile children was statistically significant for age and BMI (Table 2). Scoliosis was detected in 43 children (5.2%) including 10 hypermobile children and 33 normal children. No association was found between scoliosis and hypermobility (p=0.71). All had mild scoliosis, except for one girl with severe scoliosis. The most common scoliosis pattern was a single left thoracolumbar curve (n=16), followed by a single left lumbar curve (n=12). Seventy- three children (8.9%) had Cobb angle under 10°, with a potential for progression.

Table 2. Normal and hypermobile children in terms of age and BMI
×

Clinical findings of the hypermobile children are shown in Figure 1. Pes planus was detected in 86 children (34.3%). Neither neurologic deficit nor shortness of leg was detected. Twelve children (4.5%) received orthodontic treatment. Ankle sprain was the most common clinical symptom (31.3%) (Figure 2). 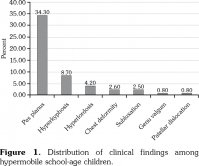 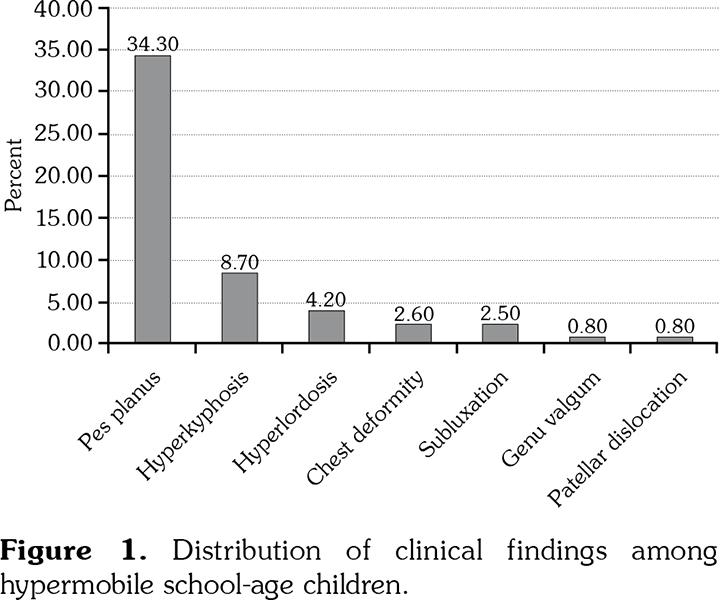 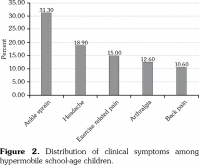 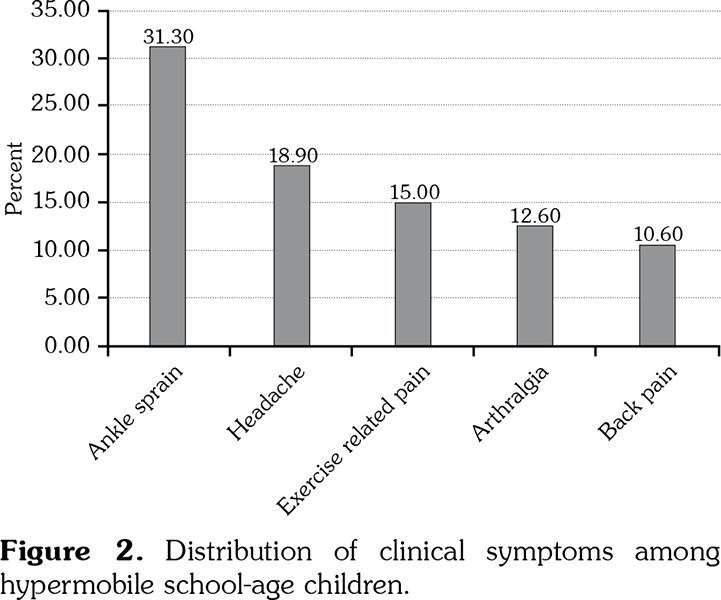 Joint hypermobility has been commonly observed in normal school children.(12) In this study, we demonstrated a prevalence of 18.4% in our population aged ranging from 10 to 15 years, using a Beighton cut-off ≥4/9. The prevalence of GJH varies according to sex, age and race. Joint hypermobility was found in 19.2% in Dutch, 58.7% in Indian, 19.2% in United Kingdom, and 15.5% in Lithuanian populations.(13-15) Our result was higher than the previously reported in other Turkish studies among school children aged ranging from 12 to 14 years.(3,4)

Another important factor on the prevalence of GJH is sex. Janssons et al.(2) reported that females demonstrated a higher degree of general joint laxity than males at all ages and this condition was explained by hormonal changes. Therefore, they suggested that cut-off values for BS should consider sex differences and recommended that a cut-off ≥8 for females and ≥6 for males would be most appropriate at 15 years of age. Morris et al.(17) showed that females had higher prevalence of hypermobility compared with males; the reason was clarified as being engaged in different types of activities that train flexibility such as dancing.(18) Interestingly, we were unable to document any sex difference as the Indian studies(16) and cut-off values for the BSs undertaken by sexes were not considered in this study.

The advantages of the BS are that it is a quick screening procedure that is easy to use and not requiring any equipment or laboratory environment. However, it does not document the severity of the hypermobile joint. Moreover, ankles and shoulders which may be affected by hypermobility are not included in the score and variations in the cut-off points complicate making comparisons between studies. The prevalence of GJH in school aged children from Lithuania depended on the BS cut-off value and ranged from 5.7 (BS ≥6) to 19.7 (BS ≥4).(15) In another study from India, prevalence of GJH ranged from 41 (BS ≥5) to 58.7 (BS ≥4).(16) A study by Clinch et al.(14) reported that the prevalence of GJH in a United Kingdom population of 6,022 children aged 13.8 years was 19.2% based on a cut-off ≥4 joints. Using a cut-off ≥6, the prevalence was 4.2%. We used a BS of four as the more conservative cut-off value. Further studies are needed to investigate the different cut-off scores in groups of children with GJH.

Similar to the study of Arponen et al.,(19) presence of joint hypermobility was not found to be associated with the presence of scoliosis in our study. Conversely, Czaprowski et al.(1) showed that occurrence of GJH was more frequent in patients with idiopathic scoliosis in comparison with healthy controls. Muscular weakness and ligament laxity are believed to contribute to the development of spinal deformity.(20) A study from Caucasian females with idiopathic scoliosis indicated that GJH appeared more often in scoliotic females in comparison with healthy controls.(21) The issue of co-occurrence of GJH with scoliosis seems clinically important in terms of physiotherapy, i.e. encouraging proprioception exercises and avoiding resting in harmful end of range postures.(21-23) Our findings are consistent with those of Czaprowski,(21) who found no relationship between GJH prevalence and scoliosis curve size or curve pattern.

The correlations between GJH and clinical symptoms are not clear. Al-Rawi et al.(24) showed a correlation between GJH and the presence of joint complaints, ligamentous sprains and flat feet among 1,774 university students. Conversely, Mikkelsson et al.(25) and Leone et al.(26) demonstrated no association between GJH and musculoskeletal pain on school children. Pes planus was the most common clinical finding in our study (34.3%). Although Adib et al.(5) indicated that pes planus was one of the main features in children with GJH, this is not so only in children with GJH but in all children. Proprioception is disturbed in children with GJH, resulting in difficulty in determining angular joint location. So, the clinical result of GJH may lead to repetitive joint injuries. The major presenting symptom was ankle sprain in our study.

This study has some limitations. We did not assess the musculoskeletal pain or findings undertaken by non-hypermobile children. Therefore, prospective follow-up studies comparing hypermobile and non-hypermobile children are needed to answer the question of whether GJH can increase the risk of future musculoskeletal symptoms. Also, the lack of data in the current study regarding the types of activities children were participating in and injury-related versus non-injury-related sprain limit the clinical significance of the findings. Interestingly, headache was the second most common symptom after ankle sprain. It was caused by servicogenic origin resulting from excessive intersegmental vertebral motion or by the spontaneous intracranial hypotension arising from the leakage from dural membranes fragility or by the involvement of temporalis muscles in temporomandibular dysfunction resulting in tension type headache with pericranial tenderness.(27-29) Likewise, Butt et al.(30) found that headache was the most common non-specific symptom in hypermobile individuals.

In conclusion, similar to that found in children from many countries, GJH is a common clinical condition in Turkish school-age children. We detected no relationship between joint hypermobility prevalence and scoliosis, curve size or curve pattern. GJH should be taken into account in children when evaluating musculoskeletal complaints and planning physiotherapy. Detection of joint hypermobility in children is necessary, considering that it might cause, in the long-term, postural alterations, pain and joint instability.